We check out the latest version of Sony's upcoming mascot mash-up for the PlayStation Move.

The more we see Sony's upcoming PlayStation Heroes on the Move, the more we're reminded of the 1984-85 Marvel Comic miniseries Secret Wars. To wit, a bunch of heroes have been kidnapped and taken to a mysterious planet in space by an alien; the planet is a patchwork of chunks from each hero's world; and the heroes must compete in challenges. Not a bad premise for a collection of minigames featuring a gaggle of familiar faces from Sony's stable of games. The latest demo of the game on hand at Sony's CES booth was hot off the presses from developer Nihilistic and let us get a feel for all five of the major gameplay mechanics that will be central to the minigames that make up the meat of the game.

The demo featured five minigames to try: gun, Frisbee, bowling ball, whip, and melee. Each minigame focused on a specific type of gameplay, offered three characters to choose from, and rewarded players with a bronze, silver, and gold ranking. It's still a little tricky to get a sense of the game's structure since the story elements still weren't on display and we just chose a game from a basic menu that listed all of them.

The minigames have been polished up since the last time we got our hands on the game. The gun minigame featured Clank as a selectable character, so we naturally picked him. The level had the tiny bot racing through an area and rescuing aliens called whibblets by finding them and taking them to select drop-off points. The task is complicated by a time limit and mobs of enemies, but as fans of the Ratchet & Clank series know, Clank is no pushover. The tiny robot packs heat in the form of a pistol with a wide spread of fire and has a special attack that must be charged by collecting crystals, and he summons the Zoni to help deal with enemies. In addition, you will be able to blast hourglasses to increase the time limit, collect health pickups, and find score multipliers.

The Frisbee minigame offered Bentley from the Sly Cooper series as an option, so we nabbed him given the soft spot we have for the series. The minigame focused on guiding an explosive Frisbee around a level and destroying containers strewn throughout the level. Unlike in the gun minigame, moving Bentley around the level isn't as important as smart Frisbee navigation. Although there weren't any enemies to contend with, the minigame was pretty tricky due to a time limit, moving targets, and a limited number of Frisbees. The levels feature rings to increase your Frisbee speed and the obligatory hourglasses to earn more time, along with point multiplier bonuses to increase your score. The one benefit of spending some time moving Bentley around is the ability to collect crystals to charge up his special attack (a computer hack) and collect Frisbee pickups.

For the bowling ball minigame we chose Jak from the Jak and Daxter games. The goal was to destroy the same types of containers we were blowing up with the Frisbee, this time with an exploding bowling ball. The demo play area was a series of small sections connected by jump pads you have to maneuver Jak to in between rounds. Jak is kept stationary during the actual bowling sequences, where the ball is thrown and guided to targets or the familiar score modifier, speed-up, hourglass, and crystal pickups. Fans will be pleased to see that Jak's super attack is morphing into Dark Jak.

We used Sly Cooper in the whip minigame that had the thievy raccoon whipping foes and destroying red containers in a level while fending off waves of enemies. Aside from the standard whipping action, it was possible to lock on to and ensnare a specific foe to hold him and focus your attacks. It was also possible to charge the whip up, by holding it back and above your head, to charge and unleash a power slam. This particular minigame herded us along to different areas to face enemies but skimped a little on the pickups.

We finally finished up our demo by choosing Ratchet for the melee minigame, which sent the lombax on a wrench-smacking frenzy. Much like Clank's gun level, the melee sequence had Ratchet rescuing whibblets hidden throughout a level by finding them and bringing them to a drop-off point. The timed minigame required exploration of the modestly sized levels and featured the same array of power-ups we saw in the other games.

Controls in the game made solid use of the Move and navigation controller and required a mix of standing still and broad motions. For the most part, all the games featured an intuitive approach to handling. Moving with the navigation controller and pointing/interacting via the Move wand all made sense and handled well. The Frisbee and bowling ball games definitely showcased the Move's precision, which we liked. The gun, melee, and whip minigames were a little more uneven, with problematic camera angles that made it a little tricky to kick butt.

Based on what we played, PlayStation Heroes on the Move is looking like a solid enough showcase for the Move--maybe not as fun as we'd like it to be but still solid. At this point, our big questions are around game modes, multiplayer support, and online functionality, all of which are still being kept under wraps. We're also curious as to how these minigames are going to tie together and if the game's story will have some fun with how all the characters wind up together--hopefully the game will have a sense of humor about itself. PlayStation Heroes on the Move is set to ship early this year. Look for more on the game soon. 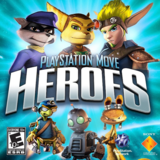