It was originally supposed to launch in December.

Platinum Games has announced that it is delaying the release of Sol Cresta, its vertical shoot-em-up game, from its original December 9 release date.

In a stream titled, "Hideki Kamiya's Very Sorry Stream," Kamiya revealed the news that the title would have to be pushed back. It now has an unspecified release date, but he hopes to have a new one sometime in early 2022.

According to Gematsu, Kamiya also showed a new "Caravan mode, which is a five-minute score attack mode, as well as a vertical screen mode. Additionally, the game's opening movie was shown and Kamiya teased that a certain ship from previous games in the series will make an appearance too.

The game was announced this year during April Fool's Day--it's a sequel to the 1985 Terra Cresta game. Sol Cresta's gameplay uses a "dock-and-split" system, which consists of three ships that make up a Yamato fighter jet. Players can split and re-order the three individual parts to change Yamato's weaponry to fit the current situation. 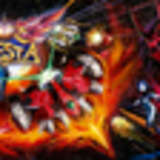