Platform-Fighter Brawlhalla Is Getting PS4 and PC Cross-Play

Brynn us to Brawlhalla.

As Brawlhalla is coming out of early access, it's entering closed beta on PS4. When the game finally does launch, it will have cross-play functionality between PS4 and PC, so you'll never lose a fighting moment with your friends.

While you're waiting to the taste the sweet, salty tears of your foes, you can catch the action in the closed beta on August 1. If you haven't already signed up, you can do so here, and invitations are already going out. But if you aren't looking to wait in line, you can hop on immediately with the purchase of the Founder's Pack for $20.

The Founder's Pack includes immediate closed beta access, access to every character currently available and in the future, an exclusive avatar, nameplate, and the Personal Sentry IV spawn bot.

Brawlhalla is a free-to-play online and local fighting game set in the eternal battle arena of Asgard. History's greatest heroes come together to duke it out once and for all. Take a pick between 30 different champs, and take on your friends in 1v1, 2v2, or 4v4 free-for-alls. You can play it now on Steam's early access, and PS4 later this year. 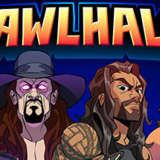