Plants vs. Zombies 2 being released this summer

PopCap has announced that Plants vs. Zombies 2 will launch early this summer.

The follow-up to the perennially successful Plants vs. Zombies was due to be released later in spring, though PopCap has still not specified what platforms the sequel will be available on. The original Plants vs. Zombies has sprouted up on the PC, XBLA, PlayStation 3, Vita, DS, iOS, Android, and Windows Phone 7.

Developer PopCap is also working on a Facebook spin-off for the series called Plants vs. Zombies Adventures, which is launching now as a limited closed beta ahead of an official release later in spring.

The Facebook game will offer up new types of zombies and plants, a new way of setting up your plant defences, and leaderboards.

PopCap says Plants vs. Zombies Adventure is the first of "several" adaptations of the original tower defence game coming in the next year. 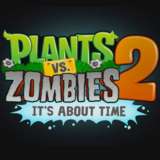