Planet of the Apes

Planet of the Apes will be a suspenseful third-person action-adventure game that combines the elements of a platform exploration game with the story of the classic novel and television series.

Fox Interactive's Planet of the Apes will be a fully 3D, third-person action-adventure game in which you'll play as the lone human, Ulysees, marooned on the titular planet. As in the film and TV series, the lone human is an astronaut from present-day Earth, launched into space on an exploration mission. Ulysses' spaceship crash-lands on an unknown, uncharted planet a thousand years later. After he emerges, Ulysses learns the horrifying truth, that on this mysterious planet, humans have descended to the lowest form of life, and apes have taken over the planet.

In Planet of the Apes, you'll take control of Ulysses and explore the game's enormous levels, using three different modes: normal, athletic, and stealth. In normal mode, Ulysses stands upright and explores the game's areas at a leisurely pace. In athletic mode, Ulysses stands ready to run, jump across pits and chasms, and fight with any unsavory ape-men that cross his path. And in stealth mode, Ulysses crouches down and slows to a crawl in order to sneak past his enemies without alerting them.

Planet of the Apes will also have a number of features that will make it more than a simple action platformer. There will be thousands of lines of spoken dialogue and a great deal of detailed motion-capture animation - both for characters' movements and for facial expressions and conversations.

You'll be able to explore the Planet of the Apes with Ulysses at the end of this year, when the game is scheduled for release. 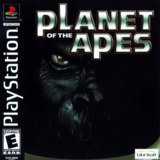 View Comments (2)
Planet of the Apes