Planet Of The Apes Video Game Coming To PS4, Xbox One, And PC This Fall

Planet of the Apes: Last Frontier arrives this fall.

The Imaginarium Studios has revealed its video game companion to the Planet of the Apes film franchise, Planet of the Apes: Last Frontier. The studio released the first trailer for the game, setting the stage for the bleak conflict that players will have to navigate.

Described as a "narrative-driven adventure game of conquest, betrayal, and survival," Last Frontier is set between the events of the series' two most recent films, Dawn of the Planet of the Apes and War for the Planet of the Apes. According to the press release, "When the fates of a tribe of apes and a band of human survivors intertwine, two worlds collide as their precarious existence hangs in the balance."

Now Playing: GS News Update: Planet Of The Apes Video Game Coming To PS4, Xbox One, And PC This Fall

Like the film series, Last Frontier blurs the line between the humans and apes. Players will be given the chance to understand both sides of the conflict by allowing them to play as both humans and apes during the course of the game. It will fall to them to navigate the tense relationship between the two species, as "every decision impacts the fragile balance between peace and war." The game will also feature multiple endings.

We first learned about Last Frontier at New York Comic-Con last October. Actor and Imaginarium Studios founder Andy Serkis (who also performs motion capturing for the film character Caesar) teased that it would be a companion piece to War for the Planet of the Apes that "feels like an interactive movie."

Planet of the Apes: Last Frontier is releasing for PlayStation 4, Xbox One, and PC. Publisher FoxNet hasn't announced an exact release date yet, but the game is slated to arrive sometime this fall. 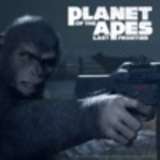