The Spring update for Planet Coaster has been revealed, and it introduces a variety of new content for free in about a month's time.

Among the new attractions are three new rollercoasters, including the game's first suspended swinging coaster and two new shuttle coasters. There's also a go-kart ride, which allows you to create your own tracks, and three new flatrides. You can see a full list of these with descriptions below.

Potentially more interesting than more rides is a new crime system. Thieves will come to the park to rob other guests of their money, while disappointed visitors "may vandalize park scenery," which sounds like a hilarious reaction to a subpar theme park visit.

To curb this kind of activity, you'll need to invest in CCTV cameras and a security staff. Not addressing the problem will cause guest happiness to drop.

All of this arrives as part of the free Spring update on April 11. This update follows last year's Winter update, which introduced new rides, shops, and winter-themed objects. 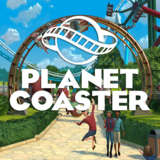