Currently, the two companies have an agreement that will see THQ publish games based on Pixar's next two films, the superhero spoof The Incredibles and the automotive comedy Cars. Those two films also happen to be the last two films Pixar is making under its agreement with Disney, which fell apart earlier this year.

The new agreement between Pixar and THQ will start in 2006 with Pixar's first wholly owned feature film. It will cover that as-yet-unnamed movie and three more films from the computer-animation studio. The deal covers games for the PC, consoles, portables, and mobile phones in all international territories and is good for four years after each film's release. 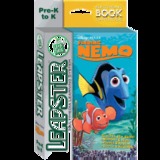