Oxygen's seafaring combat game is nearing release, and we managed to commandeer some hands-on time with the game.

Following a release on WiiWare earlier in July, Pirates: Duels on the High Seas will set sail for the Nintendo DS this August. The game puts you in the shoes, or rather the striped vest, of a seafaring pirate where you'll be taking on other ships and sea monsters across seven different environments. In addition to the story-driven single-player game, there's a multiplayer element that supports up to four players from a single cartridge. We managed to get some hands-on time with the DS version recently, and we're happy to report that we survived our voyage completely intact.

Essentially a top-down action game, the aim in Pirates is for you to fend off sea-faring vessels and monsters in an effort to loot treasure. In addition to you your side-mounted canons, you have access to sea mines, rockets, chain shots, skim shots, and flame canons--as long as you can find them dotted around the level. This special ammunition is collected by steering the ship through ammo crates that float on the water. The controls are incredibly simple--the D pad is used to turn the boat in a circle, while the shoulder buttons make it go backward and forward. The ship you get is dependent on difficulty, so at the easiest difficulty, your ship is large and can deal out more punishment than the other ships, but it's slow and can't turn sharply. However, at any difficulty, the trickiest aspect of the controls is maneuvering yourself side-on to your enemies so that you can fire your cannon at them.

There is a wide range of baddies that stand between you and the treasure. These range from ships of various sizes to monsters, such as kraken and fire-breathing sea dragons. We also hear that you'll come up against Blackbeard at the end of the game. Pirates: Duels on the High Seas doesn't use the touch screen to navigate, but it does show you an overview of the level, as well as buttons that activate one of the game's four power-ups. There are four castaways that you can rescue for extra power-ups, including the lookout, who is able to improve the coverage of your map, and a navigator, who can speed up the ship. There's also a shipwright, who can quicken repairs to your ship, and a master gunner, who increases the range of your weapons.

While Pirates is a fairly plain-looking game, there are some nice visual effects, such as the clouds and seagulls that appear overhead. There's also a cartoon style to the story elements, and pirate fans will be pleased to know that all the text is delivered in over-the-top piratespeak. While it didn't work on our preview build, the full game will feature single and multicard multiplayer. You can play with up to three other friends using DS wireless game-sharing, or these players can be replaced by computer-controlled bots if there aren't that many other people around. There will be 35 multiplayer levels spread across five environments, so we look forward to giving this a try in the finished version. Pirates: Duels on the High Seas is set for UK release on the Nintendo DS on August 22, 2008, and those of you who fancy getting your pirate on even sooner can check out the WiiWare version. Titled Pirates: The Key of Dreams, it is available for download on Nintendo's online service now. 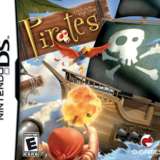 Pirates: Duels on the High Seas
Follow
$17.95 on Walmart
Buy