Source: Gaming news site Voodoo Extreme.What we heard: Microsoft may still be chafing diehard PC gamers with the recent closure of Age of Empires studio Ensemble Studios, but that wasn't the only outfit near and dear to PC gamers that the developer has put down. In September 2007, Microsoft...

What we heard: Microsoft may still be chafing diehard PC gamers with the recent closure of Age of Empires studio Ensemble Studios, but that wasn't the only outfit near and dear to PC gamers that the developer has put down. In September 2007, Microsoft shuttered FASA Studio, better known as the interactive gaming arm of acclaimed pen-and-paper role-playing game company FASA Corporation, creators of the MechWarrior, Crimson Skies, and Shadowrun IPs. 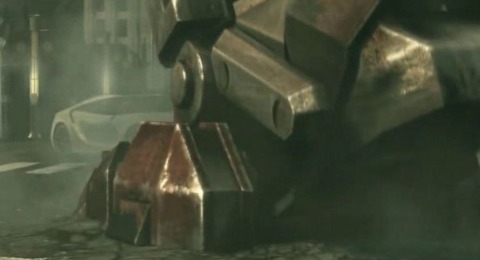 With both FASA Studio and FASA Corp. shot down--the latter of which went under in 2001--founder Jordan Weisman purchased the rights to his old company's catalog from Microsoft when he formed Smith & Tinker in 2007. "We're not quite ready to announce our plans for each property, but please be assured that our goal is to surprise and delight old fans while welcoming new fans to these fantastic worlds," Weisman commented at the time.

Nearly two years on, and the fate of one of those IPs may soon be revealed. Along with a coyly worded teaser, Voodoo Extreme today posted what appears to be a trailer for a new installment in the MechWarrior franchise. The nine-second clip merely shows a slick sports car parked in the middle of a deserted street in a futuristic city. As if disturbed by a walking earthquake, the car is jostled about by the approach of what appears to be a massive mechsuit, though only the leg of the exoskeleton is shown.

According to Voodoo Extreme's teaser, Piranha Games will be developing the MechWarrior title, though no platforms were specified. Based in Vancouver, Canada, Piranha was formed in 2000 and has contributed to a number of high-profile titles, including Medal of Honor Heroes 2, Need for Speed Undercover, and the recently released Transformers: Revenge of the Fallen. Pirahna's Web site also notes that it is currently working on "a AAA licensed franchise on the Xbox 360, Wii, and PS3."

The official story: Neither Smith & Tinker nor Piranha Games had responded to requests for comment as of press time.

Bogus or not bogus?: It's hard to argue with video evidence, but if anything is official, neither Smith & Tinker nor Piranha are ready to talk about it.

[UPDATE] A reboot of the Mechwarrior franchise has now been confirmed.