Pinball's golden age may be behind it, but flipper fanatics still have something to look forward to. Farsight Studios has announced it will release The Pinball Arcade on a plethora of platforms early next year.

Set for release on the Xbox 360, PlayStation 3, PlayStation Vita, 3DS, PC, Mac, iPhone, iPad, and Android devices, The Pinball Arcade will feature digital re-creations of real-life pinball tables from manufacturers like Williams, Bally, and Gottlieb. The game will also include licensed tables from the last remaining maker of coin-op pinball machines, Stern.

The first four tables made available will include Tales of the Arabian Nights, Black Hole, Theatre of Magic, and Ripley's Believe It or Not. Farsight plans to release an additional two tables as downloadable content every month, with added features including online tournaments and head-to-head play. The studio has said it plans to release "over 50 of the all-time greatest tables" as part of The Pinball Arcade. 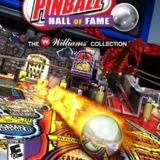