Thanks to an early demo at this year's E3, we already knew about isometric RPG Tyranny's intriguing narrative hook: rather than saving the world from some unequivocally evil antagonist as you typically might in a high-fantasy adventure, Tyranny has you enforcing the rule of a ruthless dictator who's already won. (According to game director Brian Heins, you can choose to rebel against evil, though "personally [he] finds the evil option is much more fun.")

During a more recent demo, however, we learned Tyranny offers an equally novel gameplay mechanic: an impressively granular spell creation system that allows you craft everything from basic fireballs to multifaceted support spells that buff and heal your party. While that could theoretically get pretty complex, the modular system actually seems relatively straightforward in practice.

As you progress through Tyranny's dungeons and overworld, you'll discover sigils that serve as the building blocks of every spell. The most crucial of these are the "core sigils," which define the type of magic used in any given spell, whether it be fire, frost, healing, or something else entirely. Once you select a school of magic, you can choose how the spell expresses itself--a fire spell, for example, could be cast as a cone with a short range but a broad area of effect, or you could create a touch spell that lets you incinerate foes by laying your hands on them.

With the core sigil and expression selected, you can then apply "accent sigils" to enhance or modify the spell's effect. Many of these provide basic, expected improvements like better range, added intensity, or longer duration. But others can actually add additional effects, allowing you to create a frost spell that both damages and slows your enemies, for example. The number of accent sigils you can add is limited only by the number of sigils you possess, but there is a catch.

Once you're done adding and adjusting accents, you can even name your magical creation. Want to drop a "Spirit Bomb" on some goblins? Go nuts. You can also assign completed spells to multiple characters, so if you want a party of four mock Super Saiyans, you can make that happen. "We wanted to have enough detail that you could really tweak and play with the spells as much as you wanted to," said Heins.

Finally, it's worth noting that Tyranny won't just cater to magic-users. According to Heins, fighters, rangers, rogues, and others will also find nuance and reward within Tyranny's mechanics thanks to weapons and abilities specifically designed to enhance warrior tactics. "There are ton of different abilities for you to choose from as you level up your character," said Heins. "Magic basically sits on top of that."

"We're not a class-based game, we're skill-based," Heins continued. "So you can make whatever hybrid character you want. If you decide, like, 'I started the game thinking I was going to be this dedicated sword-and-shield warrior, but you know, this magic stuff is fun,' you can start adding that to your character and really grow from there."

Regardless of how you choose to play, you can expect real-time-with-pause tactical combat similar to the system found in developer Obsidian's earlier RPG Pillars of Eternity, which allowed players to pause the action, assign commands to party members, then unpause and let the dominos fall. The overall structure is similar as well, with classic dungeons to explore, artifacts to collect, and bosses to battle. There's still plenty more to learn, though, so check back before Tyranny launches later this year. 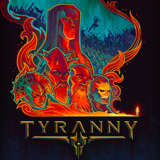