Some are taking a 40-minute play session as a hint toward a new game.

In this season of summer game reveals, every little thing a top executive does will fuel rumors and speculation for what's due to be announced. Xbox head Phil Spencer--no stranger to veiled teases himself--is stirring the pot thanks to his recent gaming history.

Eagle-eyed fans using Xbox activity tracking sites noticed Spencer loaded up the Xbox port of Banjo-Kazooie on June 1, playing for 37 minutes and unlocking one achievement: Get Jiggy, earned by collecting two puzzle pieces. He has not played the game since then, instead playing Elden Ring and Ninja Gaiden Sigma among other games, but the rumor mill has swirled anyhow.

Speculation has ranged from a brand-new Banjo adventure--the long-awaited Banjo-Threeie mentioned at the end of Banjo-Tooie back in 2000--to a remake of the first game which one Twitter user called Banjo-Redooie, and that name is just *chef's kiss.*

Is this a calculated, purposeful effort to tease a new Banjo-Kazooie, or did a high-profile gaming exec simply decide to go retro for a half-hour before diving back into Elden Ring? We'll find out when the Xbox and Bethesda Summer Games Showcase kicks off June 12 at 10 AM PT / 1 PM ET. 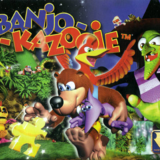