We pick a new hairstyle and fight some evil sharks in the latest addition to the Phantasy Star franchise.

In January this year Sega confirmed that it would be shutting down servers for the PlayStation 2 and PC editions of Phantasy Star Universe, citing low numbers and a lack of interest. The response from the online community showed otherwise, with hundreds of posts on Sega's message boards expressing anger at the publisher for not supporting the platforms well enough. Sega made amends in May, announcing the North American and European release for Phantasy Star Portable 2 on the PSP, complete with online multiplayer supporting up to four players at once in co-op and versus modes. We had a quick look at the opening chapter at Sega's booth during E3 2010.

Who's Making It: Phantasy Star Portable 2 is developed by Alfa System and published by Sega. The game was released in Japan late last year, selling 286,000 copies in its first week on sale. The Phantasy Star role-playing franchise is a best-seller, particularly in Japan, and is regarded as a classic in its genre. The first game in the series was released in 1987 on the Sega Master System.

What It Looks Like: The game's visuals aren't exactly new, but they are still impressive, especially during the battle sequences where there is a lot to look at. The environments aren't particularly detailed but are well designed in that you can always tell where you are and where you're going. The coolest thing is the character models, which are actually very detailed and smooth. We're guessing that's because there are a whole bunch of customization options like in the last Phantasy Star Portable, with one major new addition: you can now pick your own hairstyle. (Yeah!) Players will also be able to choose a race, face model, eye and body color, proportion, clothes, voice pitch, and a few other features. The character customization menu is easy to use, and it doesn't take long to come up with a cool-looking hero or heroine.

What You Do: The game's single-player campaign is set three years after the events of Phantasy Star Universe. The natural resources on Gurhal are running low, causing the populace to migrate to space; players will take on the role of a private military soldier participating in a group called Little Wing, performing recon missions throughout the space colony. The gameplay is very similar to the last Phantasy Star Portable, in that it's a pretty straightforward action RPG. The only difference in Phantasy Star Portable 2 is that photon points are no longer attached to weapons but to characters. Each weapon has a different attack speed and range, and players will be able to switch between them whenever they like, just like in the last game. There is also a new character class called "vanguard," which will be a hybrid of the attack classes and defense classes. The missions will be unlocked as you play them and appear to be pretty basic in structure: a battle sequence, a discovery of some sort leading to a new environment, and a boss.

How It Plays: The controls are again very basic: the square button on the PSP is used for the main attack (a basic combo), while the triangle button is used for a charge shot, which is a special attack with a bit more power. As in the last game, bars on the bottom left-hand corner of the screen will keep you informed of the status of your level, health points, and photon points. After each battle the game will tell you how many of each you have earned. There is also a map on the top right-hand corner of the screen that lets you know your position and that of your teammates. We finished off the first chapter with a heated battle where we were reacquainted with one of the game's most popular enemies: the evil shark.

What They Say: "Players will love the fact that we've included completely free online play. That's a big bonus."

What We Say: Phantasy Star Portable 2 is looking like a very solid addition to the franchise, even though not much has changed in the way the game plays. Given the series' history, this is probably a good thing. 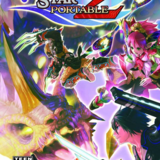