An updated version of Sega's online console game is heading to PCs in the near future. Get the details here.

The term "online role-playing game" usually suggests games that you play in an online world in the company of other players, hacking away at monsters to gain treasures and experience levels, and shooting the breeze with your fellow adventurers in the meantime. But while online games like this have generally only been found on PCs, Sega brought one of the first online console RPGs to the public with Phantasy Star Online for its Dreamcast console back in 2001. Since then, Phantasy Star Online (or "PSO," as it's usually referred to) has appeared on other console platforms, and it has gone through a few revisions by adding new content and new characters to play as. An updated version of the game, entitled Phantasy Star Online: Blue Burst is on its way to PCs, and we've had a chance to sit down with it.

Like with later versions of PSO, Blue Burst will let you choose to explore the futuristic, sci-fi world of Ragol as one of 12 different professions from three different types of characters: hunters, rangers, and forces, and from one of three races: humans, androids, and "newmans" (the latter excel in non-physical combat). All characters are different from each other, not only in terms of their crazy profession names (you can play as an android HUcaseal, a human RAmarl, or a newman FOnewm), but also in terms of how well they use physical attacks, "techs" (the PSO version of magic spells), and traps. As you might expect from a game originally created by one of Japan's most well-known development teams, the appearance of all characters, along with the rest of the game, is reminiscent of the Japanese "anime" cartoon style. Newman characters have exaggerated clothing (like tall, puffy hats), and androids have a slick, metallic look. But Blue Burst offers a few new options (over its console cousins) as to how you can customize your character's appearance. In addition to swapping out their heads and clothing colors, you can also tweak your character's height and build.

Once your character is created, you can join a game by selecting a "ship" to play on, then a "block" within the ship (essentially a way to divide players into different areas to avoid overcrowding). You'll start off in front of an information desk that you can use to join an existing team mission, or you can create your own. Blue Burst will also feature a total of 33 all-new quests, as well as an all-new quest-giving character named Momoka, who you'll meet later on. Since the game, in its original form, first appeared on a console with a handheld controller, rather than with a keyboard and mouse, its interface is noticeably different than that of your usual PC online game. Yes, like in other games, you interact with items by targeting them, but targeting happens automatically. You simply turn and face the character you want to speak with, the item you want to pick up, or the enemy you want to fight, and press the Enter key to interact. Your character's inventory and chat options, including customizable chat cues, are nested away in several menus you call up with your keyboard's Function keys (F2 calls up your inventory, for instance). The W, A, S, and D keys function as your default movement keys, while the arrow keys function as your additional interface keys to which you can shortcut healing items, different attacks, and other actions.

Once you create or join a mission, you'll head off into an "instanced" version of the mission (which exists only for you and your teammates, not for other players), which can have such objectives as retrieving an object or exterminating a certain number of monsters in the level. Blue Burst, like its console cousins, has an extremely bright and colorful look to it that recalls upbeat anime cartoons rather than the classical oil-painting-style high fantasy that has inspired several other American online RPGs. Depending on your character class and equipment, you can either take a frontal melee approach to combat (using such descriptively named weapons as "saber," "dagger," and "staff"), or some type of gun. Though, if your class allows it, you can also use traps. Combat takes place in real time (you actually click your mouse or press your keyboard each time to deliver sword strokes or fire weapons) and seems fairly straightforward, though there does seem to be at least some strategy involved when you're grouped with other players taking on larger packs of monsters. Different monsters have different abilities. For instance, the gigantic hildebear monster has a nasty habit of swatting you off your feet.

It's hard for Blue Burst to seem like a cutting-edge online game on the PC, especially considering how far online RPGs have advanced, thanks to games like City of Heroes, EverQuest II, and World of Warcraft. However, the game should offer simple, accessible gameplay that's easy to pick up and put down, especially if you're on a tight schedule. Blue Burst is scheduled for release later this month. 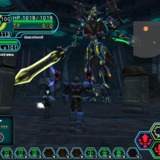