PGA Tour 2K21 has confirmed all 12 PGA Tour professionals who will be taking to the green on August 21.

PGA Tour 2K21 has had its full roster announced over Twitter, with a confirmed list of 12 pros taking to the green for the game's release on August 21.

PGA Tour 2K21 is the first official PGA Tour title for 2K Sports, who were the team behind The Golf Club 2019. The publisher had already released some information about a few of the game's featured pros last week. Notably, it featured a much less-jacked looking Bryson DeChambeau when confirming the American's participation in the title.

The full list of PGA Tour professionals who will be making an appearance in 2K21 is as follows:

Future Hall of Famer @jimfuryk has decades of experience and 17 @PGATOUR victories on you. Are YOU ready to meet Mr. 58 on the course? pic.twitter.com/qLj2sGUtWW

The pros have been introduced over on the official PGA Tour 2K21 Twitter over the past week, with an image of each accompanied by a fact about their professional play. The roster is looking pretty stacked, with the likes of Garcia rubbing shoulders with Furyk, who boasts 17 PGA Tour victories. Cantlay is also currently seventh in the PGA Tour's world rankings, and DeChambeau is raking in while ranked thirteenth on both the earnings and rankings ladder.

When the actual PGA tour was postponed because of COVID-19, it was looking like 2K21 would be the closest that fans would get to experiencing pro golf. However, thanks to the tour resuming this past week, PGA 2K21's launch on August 21 for Xbox One, Switch, PC, and PS4 will be a happy addition to fans' PGA experience instead of an alternative to in-person events. 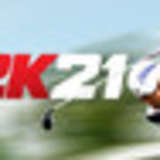