"Hey Brian, do you want to interview Pete Sampras?"The call came with just about ten minutes to go before the start of the EA press conference last Monday, just a day before the opening of E3 2009. I had found a good seat near the front at the Orpheum Theatre in Los Angeles where the press... 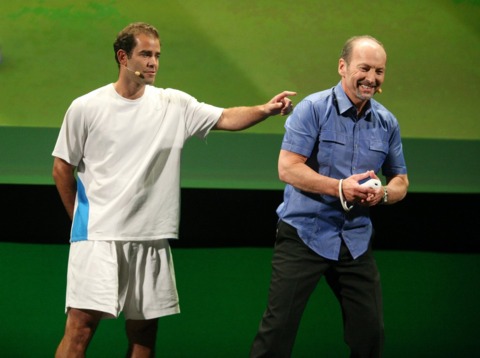 "Hey Brian, do you want to interview Pete Sampras?"

The call came with just about ten minutes to go before the start of the EA press conference last Monday, just a day before the opening of E3 2009. I had found a good seat near the front at the Orpheum Theatre in Los Angeles where the press conference was happening, had whipped open my laptop to take notes, and had my camera at the ready to snap photos. Then the call came in on my cell and threw me for a loop: Was I interested in interviewing the legendary tennis player, the best of his era, and arguably the best player of all time?

Sampras, of course, was on hand to help promote EA's upcoming Grand Slam Tennis for Nintendo Wii. After hurriedly scooping up my gear into my bag, I made my way backstage and into the lower levels of the Orpheum (where I passed by EA Sports' president Peter Moore, who was busy preparing for his segment of the EA stage show). A few corners later, I made my way into the small green room where Sampras and host of EA Sports folks were hanging around waiting for the presentation to begin.

Walking to the interview, I was wracking my brain trying to dredge up as many recollections of Sampras' illustrious career as I could before I began this remarkably preparation-free interview. Memories welled up: His remarkably strong serves, his epic matches against his chief rival Andre Agassi. His insanely hot wife, actress Bridgette Wilson. Okay, I thought, it probably wouldn't be a good idea to ask about the hotness of his wife.

It wasn't until after the interview, when I went back and checked out Sampras' career statistics, that the full impact of what he's meant to the game of tennis hit me. Fourteen Grand Slam wins (two Australian Open, five U.S. Open, and a record-setting seven at Wimbledon), an overall record of 762-222. Holding the ATP World No. 1 ranking for a record six years. The accolades go on and on. Sampras retired in 2003 and, beyond playing the occasional exhibition match, Sampras seems focused on enjoying his free time and his family. As this edited transcript will show, he's not much of a video game fan, but he's still a great sport.

GameSpot: Tell us about Grand Slam Tennis, what you've seen, and how it emulates the tennis experience.

Pete Sampras: Well, I played it for the first time this morning, and I've played a bunch of tennis games over my life. But this one is the most realistic. The response from what you're doing with the controls or what the ball is doing is as accurate as I've ever seen, from the serving to volleying to any sort of shot you would try in tennis, this is the real deal. You know, like I said, I played a bunch of these different ones over the years. And this one's the most realistic.

So, it's exciting for me to be a part of it. They got a lot of great players on the game. So, it's all really good stuff.

GS: Can you talk about how your experience with real tennis translates to the game and your skill?

PS: Well, it's as accurate as you're going to find because your action and motion is pretty similar. And you're actually getting a workout as you're playing, which is great. If you swing too early, it's going to go across course and go wide. You need to be as accurate as possible with the control. And that's what the people want. They want the response of what it's really like to play tennis.

For instance, for my game, I'm a serve-and-volley player. So that's an advantage. Someone like [Maria] Sharapova who might be better for the backcourt, she's a little stronger back there. They've taken each player's game--like my serve might be a little bit stronger than someone like [Björn] Borg's. So, it's accurate and you can play on some difference surfaces… you can play Wimbledon today, which you can't find a bigger court than that. So, it's exciting. I'm glad to be part of it. 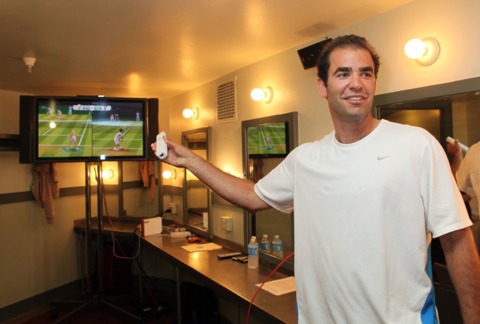 GS: And we've got the French Open going right now with that clay court. What's it like playing on clay?

PS: Well, I haven't played on the clay yet [in the game] but the clay is, you're sliding into your shots versus a hard court. You plant your foot and you're not going anywhere. So, it's a completely different feel. You need very good balance on clay. You slip and slide a little bit more. It's hard to really change directions. You know, your footing is pretty good on grass. But, at the same time, it is not as great as something like a hard court, which is, as you know, the easiest surface to move on.

So, clay you [have] got to be athletic and you just got to learn how to slide out there. You need to slide into your shots. And it takes time to get used to that. Now, someone like myself, I didn't go--play on clay. You know, I had to figure it out as I got a little bit older and as a professional. But of the three different surfaces, it's exciting. They're all very different.

GS: I have to ask you about [dominant clay player and last year's Wimbledon champion Rafael] Nadal losing on clay. Was that a surprise to see him lose in this year's French Open?

PS: Yeah, it was surprising that he lost first of all. But I think who he lost to: I've never really seen [Robin] Söderling play. If anyone would've beaten him at all, it might be either someone like a [Juan Martin] del Potro or Roger [Federer]. But that's a big upset. And it happens, you know. You can't keep that up forever. [Nadal] won it four times in a row and had a bad day. I've been in those shoes when I was going for my fourth Wimbledon. I lost to [Richard] Krajicek [in 1996] and no one saw it coming. It just happened, and upsets are part of sports. And it just goes to show there's no guarantee… when you're on that surface.

So, it's a big bullet for him, but at the same time, it gives a lot of opportunities for the other guys. They feel like they have a chance. So, we'll see.

GS: Grand Slam Tennis is the first tennis game that has Wimbledon in it. Can you tell me about the Wimbledon atmosphere and maybe your favorite Wimbledon memory?

PS: I think the [memories] that stand out more than the rest when I broke the [all-time Wimbeldon championships] record with my parents there. My best ever I played at Wimbledon was the 1999 Wimbledon Final against Agassi where I was kind of in the zone. And Wimbledon, unless you've been there, it's sort of hard to explain. I've never been to The Masters but I think it's pretty similar to that golf tournament. It's historic. It's got a lot of tradition. It hasn't changed over the years. I mean obviously they've improved the stadium but… when you walk into that court, there's not a ton of sponsors. It's very pure in that way.

And so you just feel like when you're playing Wimbledon that it's the only event going on in the world just because everyone knows this event. I love playing it. It brought out the best in me over the years. And to have won there seven times is pretty cool.

GS: Is there a defining characteristic to Wimbledon that sets it apart from other courts with the same surface?

PS: Well, it's on grass, which is a surface that I grew to like over the years. And I just felt the center court was just a little bit slower in a way, and a little bit softer, which I liked; I had a little bit more time to play. And, you know, you walked out nervous. I don't care if it was a first round or the Wimbledon Final, it was just like the center court of Wimbledon, a court that I saw as a kid. We used to get up early in the morning and watch Wimbledon Final. That was a big tradition at our house.

PS: Yeah, on HBO and on NBC. You know, it's the granddaddy of them all, the way I look at it. Some other players might look at other events. But for me it's something that--I felt like it was the biggest tournament in the world and just a great court, a great atmosphere. People love Wimbledon. There are certainly--all the members of the club, tours that come in, the people in London. I mean it's a great event.

GS: One final question, you're about to go on stage and show off this game. Tell me about your gaming experience. Anything you're playing these days?

PS: [Laughs and looks around the room] And the cue is--? Which ones do I play? Grand Slam Tennis.

GS: Anything other than Grand Slam Tennis?

PS: Yeah, they're not. And I think once I get them this game, that it will bring them in. So, that's the game that I'm into at the moment.

GS: Thanks for your time, Pete. 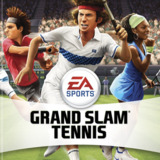