Atlus announces its North American release of Persona 2: Eternal Punishment for the Sony PlayStation this winter.

Atlus U.S.A. on Thursday announced the North American release of Persona 2: Eternal Punishment, the second installment of the popular RPG series. Originally developed by Atlus of Japan, the game's localization will be handled by the same team that worked on Thousand Arms for the Sony PlayStation.

Players take the role of Maya Amano, an investigative reporter for a popular teen magazine. One day, Maya is assigned to investigate recent murders at the Seven Sisters High School which is said to be linked to a "Joker's Curse," a bizarre ritual that calls upon a demon to grant one's wishes. She experiences bizarre happening during her investigation, eventually to meet with the Joker himself. As the story progresses, you will be treated by anime CG cut scenes in between gameplay.

The game features a "contact system" where you can communicate with enemies you encounter in order to obtain useful items and/or information if successful in negotiating with the enemy. Up to three characters can be selected to speak with the enemy during an encounter. Another feature called the "rumor system" allows you to spread rumors during conversations with other characters. By doing this, you have the ability to change the storyline to a certain extent.

Major changes have been made to the battle system from the first Persona. The new "free" battle system allows the characters to move freely about the battlefield. This allows you to concentrate more on strategy without having to worry about where your characters are situated. As in the first game, the characters can summon spirits known as "Persona" to help them during battles. However, a new method of combining Persona's during battle has been added. By casting certain Persona's in a particular order, it will allow you to combine them to increase damage inflicted onto enemies.

Persona 2: Eternal Punishment for the Sony PlayStation is expected for a winter release in North America. 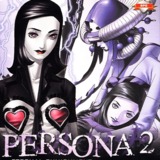