Peaky Blinders: The King's Ransom is coming later this year to VR platforms, chronicling a death-sentenced criminal who narrowly escapes a firing squad and finds allyship in Tommy and Arthur Shelby. With the show's sixth and final season set to premiere later this month, GameSpot talked to developer Maze Theory about adapting such an acclaimed franchise--and how it feels like a natural piece of it.

Rather than tiptoe around storylines that happened during a particular season of the show, Maze Theory chose to set Peaky Blinders between seasons 4 and 5--in 1928, just prior to the rise of British fascist leader Oswald Mosley. By using the gap between the seasons, the story better existed on its own while adding to the existing Peaky Blinders' canon.

"We really wanted to make a story that we could feel was true and authentic but also could be original, as well," studio head Russ Harding said. "And it felt like there was some interesting periods between the [series] that would allow us to do some more exploration with the team of [executive producers] Caryn Mandabach and Steven Knight."

Having prior experience with Doctor Who TV-to-VR game adaptations, Maze Theory knew to assure Knight and his creative team that it would approach the material with respect for authenticity. It was made easier by how much the game developers loved the world and wanted to be in it--while based on the real Birmingham and London, the show is still largely fictional. It lets the show's writers play with historical figures like Mosley interacting with the Shelby family, and Winston Churchill's relationship with Tommy will be explored in The King's Ransom.

The authenticity extends to the cast, with lead actor Cillian Murphy returning as Tommy Shelby, joined by Paul Anderson returning as Arthur Shelby. Anderson did full performance capture for his role, as well, which Harding said will be very significant in The King's Ransom. One actor who, sadly, couldn't return was Helen McCrory, who passed away just as the actors had begun participating. Her character Polly will still be in The King's Ransom, albeit via another actor who didn't attempt to copy McCrory's performance.

Peaky Blinders: The King's Ransom is currently planned for a 2022 release, though no narrower window has been set. The sixth and final season of the show premieres via BBC on February 27 and comes to Netflix at a later date, with a film set to begin shooting in 2023. 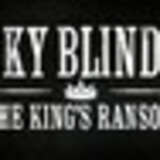