PC Building Simulator 2 has been officially announced by developer Spiral House, and will be launching later this year exclusively on the Epic Games Store. A follow-up to the original 2018 game that digitally captured the excitement--and incredible stress--of putting together a gaming rig, PC Building Simulator aims to expand on that game with more detailed builds, customization, and a host of new features to deepen the PC building experience.

There'll also be a 30+ hour career mode, as well as 1,200 officially licensed parts from hardware manufacturers such as AMD, Intel, and Nvidia. There are some RGB elements for good measure because no PC is complete without rainbow lights.

Spiral House says that its sequel will also have improved graphical fidelity so that the realism of hardware and software simulation can be stepped up. Building your own PC has become an art form over the last decade, with many brands offering cases that are designed to show off the hardware inside of them. A specific release date has not yet been revealed.

Modern graphics cards--if you can find one--come equipped with RGB lighting, and it's not unusual to see motherboards and RAM chips also offer cosmetic extras so that a gaming rig can stand out from the pack. Just look at Witcher actor Henry Cavill's rig, which the Man of Steel put together recently.

On the extreme side of the customization fence, you get PC builds that go all-out like this homage to Doom Eternal's BFG cannon. It can't punch a hole into the surface of Mars, but it'll definitely have an impact on your eyes. 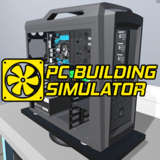