Destination Software gives us a look at its upcoming GTA-like action game for the Game Boy Advance.

During our time at Destination Software's E3 2004 booth, we were given our first look at the company's newest action game, Payback. Payback is themed similarly to the early Grand Theft Auto games in that it features a top-down camera view and is based around the concept of committing crimes, which includes stealing cars and, basically, killing those who get in your way. The game has a plot, of sorts, in that you will take on the role of a criminal-for-hire. However, the game's missions are actually largely optional, and your primary goal will simply be to cause as much mayhem as possible.

The basic gameplay in Payback looks very much like the first couple GTA games. You'll run around one of eight different city maps while driving a variety of different cars--each of which handles differently--and using multiple different weapons, like handguns, machine guns, and baseball bats, to mow down anybody in your path. You'll actually be able to go inside buildings in the game, as well as wreck your cars in fiery explosions. Most of the game will involve you racking up points for completing missions and just generally causing as much chaos as you can. Bonuses will be awarded for performing specific types of actions, such as running over someone with his or her own car, which earns you an "irony bonus."

Payback will feature a full 3D graphics engine, which, from what we saw, looks extremely good. Buildings and set pieces look quite nice, and each city features unique environmental styles. The game will also include GBA-link-cable support for up to four players. What exactly the multiplayer component of the game will be is still somewhat up in the air, but it will most likely feature a deathmatch function for up to four players. All told, Payback looks like an extremely intriguing game, both technologically and from a gameplay perspective. Though no official release date for the game is available, we expect to hear more on one in the near-future. We'll keep you updated as information becomes available. 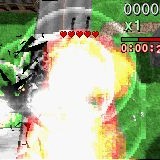