PAX East 2022: SpiderHeck Could Be The Perfect Spiritual Successor To Duck Game

SpiderHeck's physics-based battles are immediately fun, just like my other favorite four-player brawler.

TinyBuild's booth at PAX East 2022 was much, much more than a booth. It was a full-on carnival, complete with games that would fit in at any county fair (you could play whack-a-mole or fish for trinkets with a crane game) and plenty of actual video games. At the back of the publisher's area was something that stood out from the rest of the bright-orange decorations though: a massive inflatable spider loomed over a set of four TVs, inviting attendees to try SpiderHeck, what could be my favorite multiplayer brawler since Duck Game.

SpiderHeck is just about as silly as its name sounds. It's a physics-based platform brawler, which is a long-winded way of saying you beat up other players and things fly all over the place. In SpiderHeck's case, players control spiders (duh) that can pick up weapons and zip around the game's 2D maps by shooting webs.

Since it's a four-player brawler, I was thrown right into a game with two other PAX attendees–as well as a PR person–and had an absolute blast. There are some games where it's useful to know the people you're playing with to really have a good time, and SpiderHeck isn't one of them.

As a little spider dude, you have to be able to take out the other spider dudes in your game, and that's all done with SpiderHeck's outrageous arsenal of weapons. When the game's players (up to four can be in a single match) spawn into a map, weapons spawn above them almost immediately. They can range from laser pistols to shotguns that fire waves of energy or flat-out lightsabers.

Whatever you choose to fight with, SpiderHeck's weapons don't just impact whatever you're aiming at. Each weapon has its own kind of interaction with the game's physics. Firing that laser pistol blasted my tiny spider backward, and the bigger the weapon I used, the further away I was flung after firing. I even died because I shot my weapon and ended up falling off the platform I was on and straight into lava or a bottomless pit.

The only way to save myself whenever that happened was to shoot out a web and fling myself to the nearest surface. While the rest of the game felt appropriately awkward to play–it's not like a physics-based brawler where you're a spider will have the same smooth controls of a racing sim–I couldn't get a hang of placing my webs in the right spots. I'd often shoot them much lower than I expected, leading to a one-way trip into a pool of lava or some other insta-death area.

Some of SpiderHeck's levels also play into its physics system, like one that's just five suspended platforms that players can hop across. Naturally, each platform moves as a player jumps on or off, and if one's shot, it gets shaken around. Matches on that map devolved into the four of us playing yelping every time we shot our weapons or were shot at.

Everything that SpiderHeck is doing here reminds me of a somewhat simpler version of Duck Game, another irreverent multiplayer brawler. While that game doesn't have the same unique physics system as SpiderHeck, the two have the same energy. They're not very complicated and are immediately fun. When I was playing the game, I didn't think about what I was doing with my lightsaber, I just did it. When that meant spiking the thing down onto another player after being flung up and out of the camera's view, it was impossible to not have a good time.

Thankfully I don't have to wait to try out SpiderHeck with my friends. The game doesn't have a release date just yet but the very same demo I played at PAX is available for download right now on Steam. 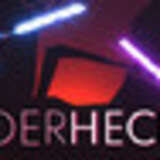