We try out the new insect-filled tower-defense game for the PlayStation 3.

Relations between man and insect in games have seen ups and downs over the years. The latest low in man/bug interactions is the upcoming Savage Moon for the PlayStation 3. The game is an original title for the PlayStation Network from Bristol, England-based Fluffy Logic. We tried our hand at a work-in-progress demo of the game in Sony's PAX booth, and it showed some promise.

The basic demo let us deal with waves of bugs that rushed out to swarm a base. The goal was to keep them from reaching an exhaust-port-like opening in the far right corner of the screen. The waves would come pouring out of caves in the upper left-hand corner of the map. The oncoming throngs of bugs, which ranged from ground- and air-based critters of varying sizes, followed what appeared to be a fairly set path to the port. To stop the bug menace, you'll need to lay down structures in and around their way. The demo that we played offered the expected mix of offensive structures, which included machine guns, mortars, antiair guns, and lasers. In addition, it's possible to lay down defensive structures such as repair towers and blocks. However, as with all tower-defense games, there are costs and limitations on creating the different structures. The demo started us out with a fair chunk of change, which was replenished as the bugs were blasted out of existence. Money is essential because each structure has a price tag associated with it. There also appeared to be limits to the number of structures that could be laid down per wave, although that quota seemed to go up as the waves were cleared. The interesting wrinkle to the action is that the bugs can apparently attack your structures and take them out, which can really ruin your day.

Control in the game was straightforward and easy to pick up. The left analog stick controlled an onscreen cursor that you'll use to target areas and place structures. X calls up the build menu and also serves as your confirmation button when you've selected a building. You'll also be able to use the cursor to highlight structures that you've already created and beef them up.

The visuals in the game sported a high level of detail and a glossy 3D sheen. The various bug types that were making their way to the port looked sharp and animated pretty well. The detail was especially apparent when the camera was zoomed in. The environment wasn't quite as showy but still managed to look good thanks to various special effects that were used to dress it up. Lighting and smoke effects gave the living moon that the level is set on a slightly foreboding atmosphere. In addition, there was an eye-catching array of effects for the different structures, ranging from gunfire to various area effects. The only rough spot at the moment is the game camera and overall performance. The camera can get a bit weird when it moves around some of the smoke effects and when the lighting gets odd. The other rough spot was the frame rate when the screen filled with too many bugs and explosions. Given the game's early state, we expect that there will be some improvements.

Based on what we played, Savage Moon is looking promising. We like the appearance of the game and how it plays, although we hope that the camera and frame-rate issues get sorted. We're anxious to see more levels and play mechanics, especially if there's some kind of multiplayer mode. If you're looking for a slightly different tower-defense game for your PS3, then you'll want to keep an eye out for Savage Moon when it ships later this year. Look for more on the game in the coming months. 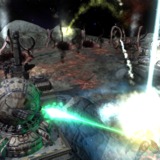