The former English-speaking face of Metal Gear Solid 4 talks about his duties on the game, the real reason Japanese gamers aren't buying the Xbox 360, and more. 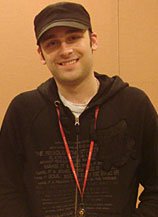 GameSpot caught up with Payton at the Penny Arcade Expo to talk a bit about his past with Konami, his plans for the future, and get some insights into the state of the Japanese gaming industry.

Ryan Payton: That's a good question. It's a little bit of both. My main responsibility at Kojima Productions was making sure that we were up to speed with what was going on in the West. What you had was basically a repeat of what happened with Metal Gear Solid 3. It sold pretty well, but it came out at Christmas 2004. You had GTA: San Andreas, Halo 2, Metroid Prime 2, Half-Life 2, and so many other titles. And as we were looking at the release calendar for MGS4, it was originally going to come out at the end of 2007, when we had The Orange Box, GTAIV, Halo 3, Metroid Prime 3...it was basically the same thing. We knew the competition was going to be very heavy, so one of my main responsibilities was making sure the game was up to speed and clicked with American and European players.

GS: Was the competition the biggest reason for the game being pushed into 2008?

RP: I think we just needed more time. We weren't really thinking about the competition at that point because when we decided to push it back, we still didn't know what was happening with GTAIV. And there weren't a lot of big titles coming out on PS3 that Christmas. We just wanted more time with the game.

GS: Were there concerns about releasing it outside of the holiday window?

RP: If you asked me that a couple years ago, I think yes, it would have been an issue. But the industry has evolved so much and grown that you can support titles throughout the calendar year, which is something I think is so encouraging. I was talking to a friend saying I feel so lucky to be in the industry because coming back to the US, you're surrounded by anxiety or negativity about the American economy. On the other hand, you have the game industry which is so healthy, and it can support a game like Metal Gear Solid 4 that came out in June, or GTAIV, which came out in April. It's all very, very encouraging, not only for the gamer but for the industry.

However, it's tough trying to figure out what quarter you want to have a game come out, because games slip. Publishers are starting to realize that. EA talked about it recently, saying they were doing trying to shove something out that wasn't finished. So you have things like Mercenaries 2, which comes out next week. I haven't seen the review scores, but I suspect that was time well spent in making the game come out in whatever form it comes out in.

GS: Mercenaries 2 and Metal Gear Solid 4 are games we've been hearing about for years. Do you think there's such a thing as too much hype? Do people get hype fatigue to the point where they don't want to look forward to something anymore?

RP: I don't think so. Any kind of press like that where the game title's in the collective conscious of gamers for an extended period of time is good. There are rare exceptions of it, where things hit big instantly and everybody needs to try it out, like Braid. But how long have we been talking about Spore? How long have we been talking about Too Human? I think those two games are part of gamers' vocabularies simply because they've been around so long.

At one point I had a theory that there was some kind of fatigue related to hype with Halo 3. I thought it was getting out of control, then they launched it and it was a massive success. People couldn't get enough. That's kind of made me rethink that theory. I don't think you can get "too much press" for a game.

GS: Generations ago, it seemed like almost all the hit games were Japanese. But now we've got games like Grand Theft Auto, Guitar Hero, Halo, God of War, and Madden topping the year-end sales lists. What happened to cause the Western shift and why?

RP: In one sentence or less? [Laughs.] I think the bottom fell out of the notion that the Japanese consumer is always going to be interested in the newest gaming technology. This generation was a big shellshock to a lot of hardware makers and publishers because Japanese gamers aren't first in line for HD-gaming, or next-generation gaming. We're still feeling the aftereffects of that.

To me it's amazing because I come back to the States and HD is in the vocabulary of everybody around. They get it, for the most part. In Japan, it's all about portable gaming and Wii gaming, which is good, to a certain extent. But I think the main culprit is this apathy to new technology.

GS: So there's nothing about the approach that Western developers take toward games?

RP: Or even Japanese development teams. I don't know how Resident Evil 5 will eventually sell, but the fact of the matter is there are fewer people with the machines to play the game than there were for Resident Evil 4 on the GameCube and PlayStation 2. It's a big shock to everybody.

GS: What are the biggest misconceptions Western gamers have about the Japanese gaming industry?

RP: Maybe that the Xbox 360 doesn't sell because it's American-made. There are reasons it's not selling, but that's not it. Look at people lining up for the iPhone or the iPod in Japan, and you'll see that there's no stigma against American design. And it wasn't because the Xbox 360 was too big and doesn't fit in the living room. That's all some stupid static that came out of message boards or some journalist's incorrect approach. I think these next-gen experiences just don't captivate the Japanese gamer like they used to. Maybe they have more distractions. Portable gaming is just taking a greater hold on people.

Also, there's an issue most people don't bring up but it has a big part to do with why next-gen consoles aren't selling [more]. The Japanese really value privacy, and the fact the Xbox is online and they can chat with anybody is not really appealing. They want to know intimately these people they're playing with. That's one of the reasons the Wii might work so well, because it's not an online experience; it's about getting people into your home and playing with them.

GS: Metal Gear Solid's storyline is pretty convoluted. As the resident Westerner on the team, what approach did you want to see taken? Alter the game to be more accessible for Westerners and risk losing some of the MGS flavor, or be faithful to the source material but risk alienating confused gamers and newcomers to the series?

RP: My approach to the script was ambitious in the sense that I wasn't concerned about having a direct translation. When you do that you get in trouble, you get bad anime. So I went out on a limb to a certain extent by adding a few lines here and there if there was an awkward pause in the Japanese or if the English translation was just too short. Thankfully I had the trust of Hideo [Kojima] and Ken [Mirata], who were willing to trust me with the script, that it reads well and mimics a normal script coming out of Hollywood.

GS: Now that you're done with Konami, what do you want to do next?

RP: I'm spending time with my family basically, and playing a lot of Too Human.

GS: But you want to stay in the industry and in the development side of it?

RP: Yeah. I don't think I'll ever quit this industry, and I do want to stay somewhere in North America where I'll be closer to my family.

For more from the convention, check out GameSpot's complete coverage of Penny Arcade Expo 2008.