Sony Computer Entertainment opened the official Web site for its PlayStation 2 music-rhythm game Parappa the Rapper 2. Parappa and his friends PJ Berri, Milk Can (the band from Unjammer Lammy), and Sunny Funny will take on the Noodle Group in this sequel. Parappa Papa and Sunny Funny's father also appear as new supporting characters, playing an Abott and Costello-type role. The game now lets you have a practice session before you perform your rhythmic act with the teachers, who are Hairdresser Octopus, Chop Chop Master Onion, Instructor Moosesha, Beard Burger Master, and Guru Ant.

Parappa the Rapper 2 is due August 30 in Japan. A North American release date has not been announced at this time. 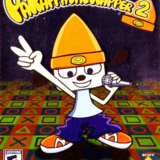