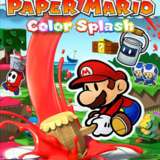 Mario's flatter, cuter off-shoot Paper Mario has long proven a welcome foil to his three dimensional counterpart, offering humor, story, and RPG-inspired gameplay in place of pure platforming. The latest installment of the Paper Mario side series, Paper Mario: Color Splash, carries this tradition onto the Wii U, but rather than stick with the back-to-RPG-roots approach of the recent Mario & Luigi: Paper Jam, Color Splash instead borrows from 2012's Paper Mario: Sticker Star.

Like Sticker Star, Color Splash's semi-turn-based battle system utilizes collectable stickers (or in this case, cards). Different cards produce different results, ranging from straight-forward melee attacks to elaborate cutscenes that inevitably result in your enemies getting pummeled. Unlike Sticker Star, however, Color Splash arms Mario with an especially artistic hammer that both absorbs and distributes paint. If he smashes a colorless object or area, the hammer paints that object, potentially solving a puzzle, triggering an event, or just spawning some coins.

With his hammer and several trusty sidekicks in tow, Mario travels to a mysterious tropical island after receiving an ominous letter containing a folded Toad who's been drained of his color (we'll ignore the fact that, in the context of a world where everyone's made of paper, this is basically like receiving a corpse in the mail). Once he reaches the island, he befriends a talking paint can named Huey, who informs Mario the island houses some kind of terrible color conspiracy. Naturally, it's up to you to unravel the mystery and return color to the island.

If this sounds awfully goofy for a Mario game, well, that's intentional, at least according to associate producer Risha Tabata. ''When we think of what we cannot do in a traditional Mario game, what we came to was, 'Well, definitely humor.' So we wanted to focus on humor as much as possible,'' said Tabata during our behind-closed-doors demo at E3. ''All these different people got together in meetings room and basically very, very diligently and seriously thought of how we could do the stupidest, craziest things possible.''

Contrary to this commitment to keeping things silly, Color Splash uses its unique painting hook to imbue its mechanics with unexpected nuance. Much of its strategy stems from the paint gauge that governs most of the gameplay. Basically, you have a finite amount of red, blue, and yellow paint that you use not only to fill in blank spots you find around the world but to power up your cards in combat as well. Certain environmental puzzles require specific colors and most higher-level cards absorb a great of paint, which may force you to make some tough choices when managing your color reserves. Fortunately, you can stay supplied by simply smashing some of the paint from any color-filled object in the world.

The cards themselves demand a bit of strategy as well. According to Tabata, using certain cards in conjunction with one another will produce more powerful results--and you'll have plenty of options to choose from. ''There are tons of different cards in the game,'' said Tabata. ''Obviously Mario is going to be throwing fireballs at some point. There's kind of like a spring jump where you can actually jump a ton of different times on one end.''

In most cases you'll simply activate these cards on your Wii U Gamepad and flick them up to the screen, but certain attacks also include quick-time button presses that trigger bonuses like splash damage if you time them correctly. And as you defeat enemies and collect their little hammer icons, you'll gradually unlock upgrades that further deepen your strategic options in combat. ''As you continue the game, you'll open up more card slots, [and] the amount of paint you're able to store in your hammer will expand,'' Tabata explained.

Structurally, Color Splash contains a series of linear levels full of puzzles, traps, NPCs, and enemies. Each ''course,'' as Tabata calls them, also contains one or more stars; the order in which you grab those stars dictates which courses open next, though each of the 30-odd courses stands on its own. ''We kind of focused on trying to have each course have a different feel,'' said Tabata. ''One course might be more focused on battle, but another course might focus more on puzzle-solving. There are definitely different places where you will need to have platforming skills.''

Regardless of what the courses contain, they're bound to be visually splendid. The world bursts with bright colors and packs plenty of clever touches that make use of the paper-based aesthetic, at points looking almost like mixed media. ''The artists spent a lot of time thinking like, 'Maybe we can try this and it'll look really like paper. Maybe we'll have to do this to make it look like paper,''' said Tabata. ''The base of everything is made from cardboard and then on top of that you're layering different types of paper.''

Clearly the Wii U has worked out for Paper Mario visually; now we just have to hope the card system can deliver gameplay that remains engaging and strategic over time instead of devolving in gimmicky Gamepad tedium. We’ll find out when Color Splash launches this October.