JoWood's Panzer Elite: Gold Edition, a special edition of the 1999 tank simulation game Panzer Elite, has shipped and will soon be available in stores, according to a company representative. The special edition features the full version of Panzer Elite, which includes more than 80 scenarios based on real WWII battles from 1942-1944 in Europe and North Africa, along with new campaigns, new vehicles, and a complete landscape and scenario editor. Players will command more than 100 different vehicles, including the German Tiger and American Sherman tanks, and they can take part in winter campaigns in Russia and Britain, as well as night missions.

Panzer Elite: Gold Edition will soon be available in stores for an approximate retail price of $29.99. For more information about Panzer Elite, take a look at our full review of the game. 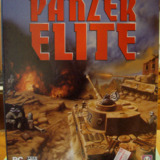