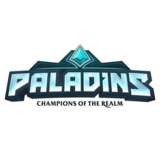 When I say the word "Paladins," what's the first thing that comes to mind?

Is it an immensely popular shooter from Hi-Rez Studios, reported in November to have surpassed the 4 million player mark? An intense esport with picks and bans, and a complex character customization metagame? Or it just a game you dismissed, because you heard it was an Overwatch clone?

The video above was released in September 2016, the same month as Paladins went into open beta. It was a rallying cry for many, as it highlighted the most obvious, direct comparisons between characters, roles, and abilities between the two games. Comments on that video, forums, and social media accounts across the internet got nasty very quickly, and as with any mid-to-large scale controversy, the media picked up on it and started to publish takes of varying temperatures.

"I don't think Paladins has done anything outright malicious with its character design," Forbes concluded in its article on the subject, "but they have to realize that releasing these types of heroes when Overwatch is dominating the market is going to look very "me too!" of them, and while class archetypes exist for a reason, I think Paladins wandered too close to a line in the sand here."

The International Business Times, The Escapist, and PVP Live all used the term "Overwatch clone" in headlines on articles about Paladins. Hell, we here at GameSpot even ran a story called "Overwatch-Like Paladins Hits 4 Million Players on PC, Sits in Steam's Top 10 Chart." Like it or not, stories about Paladins became a viable commodity due to their attachment to that controversy.

The last public comment on the subject came from Hi-Rez chief operating officer Todd Harris. Back in September, Howard took to Reddit to post about Paladins' history, and to discuss what inspired the game. He made it clear that Paladins had been in development for a long time, and concurrently with Blizzard's Overwatch. He said "it would be almost impossible for a studio of our size to 'clone' Overwatch in a year," and elements both games share had been shown publicly by Hi-Rez in footage released long before Overwatch details were announced.

The company specifically decided to make the statement in that Reddit post, and left it at that. To paraphrase, its position boiled down to 'we're making the game we want to make, we acknowledge the similarities, but we believe in Paladins and think our community will as well.' I sat down for a number of interviews with Hi-Rez employees over the course of Hi-Rez Expo 2017 to discuss the kerfuffle, to see what kind of impact the negative attention had on the game, and on the team.

My first interview was with Harris himself, who also spends about 50% of his time as product lead on Paladins. "We were… we were pretty surprised [laughs] when we saw the announcement and it was so close to what we were working on," Harris said. "So, we spent a fair bit of closed alpha time working out whether we need to diverge even further. As a developer, one of the things we tend to do is find a genre we really enjoy, and we try to innovate in just a few areas. Not change too many rules, but change some interesting-enough rules to move the genre forward. With Smite, we did it with perspective, the camera change."

The Paladins team was experimenting with degrees of random-number-generation in the card system, maps that are more open and less reliant on choke-points than other games in the genre, adding mounts as a fast way to traverse these maps, and various other things. "Ultimately some of the experiments panned out, some didn't, and we just tried to keep our north star being what we as a development team--and the majority of our alpha players--wanted. And that's what we ended up putting onto Steam in September. Ultimately, we went with what we thought would make the best game, and decided not to worry about what else was out there."

So while it was frustrating for Hi-Rez leadership to see such a negative response to the game, there is always a silver lining. "On the flip side of that, you'd rather people be talking about you than not talking about you, right? So the cold marketing calculations says that if headlines are being written and people are talking about you, that's better than throwing your rock into the pond and not making a wave."

To sum up the whole comparison ordeal, Harris used the following analogy: "I've been making pizzas for 10 years. All pizzas have similar ingredients; they have cheese, they have crust, they have pepperoni. There can be a lot of thriving pizza shops out there--people have differing tastes in pizza. Then one day, Mega Pizza Store opens up, and everyone is like PIZZA HAS ARRIVED."

So, how did this affect the people on the ground, the artists and designers whose work was coming under fire? It seems it very much depends on the person. "You get a thick skin when you've been around for awhile. Hmm, actually it's probably not a thick skin, more that you learn better techniques for pulling the morsels of information out of every piece of feedback you get," said Rory Newbrough, lead designer on Paladins.

This came as a shock. I'd gone into this interview expecting the lead designer to be one of the most negatively affected people on the team. I'd set aside a large chunk of my interview slot to really get down in the mud with Rory, dredging up the pain that comes when faceless people on the internet decide to target you or your work. But it seems Rory was largely unaffected, and I was left scrabbling for new questions to ask.

"A lot of it was rather unsurprising," he volunteered, as I searched my now-useless notes for inspiration. They had seen the same trailers as everyone else, nobody was more aware than the Paladins team of the similarities between the two games. "The fact that people are responding like this means they're passionate. Better that than them not talking at all."

Not everyone has Newbrough's stoicism, though. The Dunkey video (above) might have generated a bunch of buzz around the brand--which is great from a marketing standpoint--but that doesn't necessarily take the sting out of it for the people that poured themselves into their creation.

"It was crushing," said art director Thomas Holt. For me, for the team--it's like with any kind of knee-jerk reaction, it's people taking a face-value look at something, and then passing judgement. You almost begin to second-guess yourself, you discard ideas without seeing what they could evolve into, because no matter how tough you think you are, those words get under your skin."

While Holt appreciates the impact the controversy had on the marketing of the game, he noted that it feels different when you're on the development floor, compared to being on the leadership team. "We put in a lot of time, long hours, and a lot of personal time to get it done. You do get attached, you put a lot of yourself into your work," he said. "So, even if on paper it was good, or for the marketing it was good, that doesn't mean it wasn't painful."

All of this pain did lead to a beautiful thing, though. "Actually, during the Paladins final [as part of the invitational tournament held that weekend at Hi-Rez Expo], I had quite a few people reaching out to me on Twitter, who had been vocal in the past with their opinions about what we were doing, and I got a couple of apologies from people who actually took the time to look at what the game is and they realized the conclusions they'd jumped to previously weren't accurate."

In fact, the entire event seemed rejuvenating for Hi-Rez staff. Being surrounded by a huge number of fans that had chosen and paid to be there was a reminder that negativity is amplified by online interactions, and doesn’t necessarily represent broad public opinion. “Events like this give us a chance to hear from our fans, the people that actually know what the game is,” Holt said.

Ultimately, the question of whether Paladins is a clone or not is moot. There is nothing new under the sun, every idea is derivative of the inspirations that bore it. Game development often moves in waves, as savvy developers identify trends and gaps in a market that moves astonishingly quickly to serve a community that churns through content at breakneck pace. What matters is whether the game serves the community that cares about it, and it seems that Paladins' popularity speaks for itself. Paladins is a free-to-play title, and aims to hit a far lower minimum PC specification than Overwatch. That is a different audience to the people Blizzard is targeting with its hero shooter. There is room enough for both. Hi-Rez and Blizzard are doing very well from the business generated by both games.

But the companies don't matter, not really. What matters is there are people behind every brand, actual human people that need to deal with the feedback we send, both practically and emotionally.

GameSpot attended Hi-Rez Expo 2017 at the cost of Hi-Rez Studios.