We try out the new multiplayer modes in this fast-paced first-person shooter.

Painkiller, the upcoming first-person shooter from publisher DreamCatcher Games and developer People Can Fly, is almost here. We've heard a lot about the single-player portion of the game, which will let you play as heaven's hitman, doling out justice to evil beings and creatures in purgatory. However, we hadn't heard that much about the multiplayer portion of the game. Luckily, we recently had the chance to check out the multiplayer--just before the game ships to stores.

The game has an easy-to-use built-in server browser and offers four "skins," which are appearances that you can choose for yourself in multiplayer. These include beast, demon, fallen angel, and knight. Painkiller has five multiplayer modes, which consist of familiar game types such as deathmatch and team deathmatch. It's the three new modes, however, that deserve particular attention, because they offer an interesting variety of new play styles and challenges.

The first new multiplayer mode is called The Light Bearer, or TLB. This mode plays a lot like deathmatch, but the catch is that somewhere on the map is a special item that grants unlimited "quad damage." As a result, all weapon fire from the player who possesses this special item inflicts a whopping four times more damage than normal, as long as the player stays alive. As the light bearer, the player has a blue glow that differentiates him or her from the rest of the players. Needless to say, it's in the other players' best interests to gang up to kill the light bearer, because it's extremely difficult to do so alone. Fortunately, once the light bearer is dead, the quad-damage item can be picked up by any other player--who will then become the new light bearer. In addition to quad damage, the light bearer gets enhanced vision that works much like night-vision modes in other first-person shooters. The light bearer's view will switch to a slightly blurry black-and-white view that also amplifies light, so staring into a brightly lit area can be almost blinding. However, all the other players appear in red, so they stand out easily against the black-and-white backdrop.

Voosh is the second new mode, and it can best be thought of as a frenetically-paced deathmatch. In Voosh, all players get the same weapon with unlimited ammunition, and no one can pick up or switch to any new weapons. However, after a set amount of time, everyone will cycle to a new weapon, which forces players to change tactics. So you may be lining someone up for a rocket kill when suddenly the weapon changes to the stakegun, so you'll have to alter your approach. The administrator can select the weapon rotation or set the server to random to make the proceedings unpredictable.

Perhaps the most challenging and fast-paced of the new modes is People Can Fly, or PCF. You might think of PCF as a combination of deathmatch and the racquetball game squash. In PCF, all the players are dropped into a large, circular room with a very high ceiling. Everyone has a rocket launcher that fires a bouncing projectile, and the rules are simple: As long as your feet are on the floor, you can't be killed. However, if you hit someone with a rocket, they'll bounce into the air, depending upon the angle and velocity of the projectile's impact. If players do get launched into the air, they become vulnerable and can be killed. So, in essence, the game represents a crazy battle between players who try to launch one another into the air so that they can be killed. The easiest way to score a kill seems to be to bounce a player near a wall so that you can then use the splash damage from the rocket to kill him or her. If you manage to shoot someone out of the air, you'll receive triple the normal amount of points. As you can probably tell, PCF makes full use of the game's physics engine, so in this mode, you'll see players literally bouncing around like rubber balls.

Painkiller looks great, and we experienced high frame rates at maximum graphical detail on our high-end system (a 3GHz Pentium IV with a Radeon 9800 Pro). This translates into extremely smooth movement and action. The levels range in size, but they're generally designed for smaller groups of players. Some of the smaller levels are very intimate in scale, so they're perfect for two to four players, while the larger levels should play well with the maximum of 32. The levels we saw look like they were inspired by medieval European environments. As a result, you'll end up running around the insides of a cathedral and a castle, as well as an elaborate Venetian-like plaza. There are plenty of weapons and ammunition on the ground, in addition to special power-ups, health, and armor. Occasionally, you'll spot these items in seemingly inaccessible places, so you know it's only a matter of time before someone figures out a method for reaching them.

The standard weapon is the stakegun, which, as its name suggests, fires a giant wooden stake. This is a powerful weapon, and a direct hit will usually result in a kill, unless the target is wearing armor. It is also a challenging weapon to use, due to the slow reload time and the fact that you have to lead your target to compensate for the stake's time in flight. Getting into a stakegun duel with another player is fun, because you have to try to anticipate his or her shots, in addition to dodging them. All the game's weapons have a secondary firing mode, provided you have the ammunition to use it. The stakegun's is a grenade launcher, which launches an explosive canister that explodes after a few seconds.

The most useful weapon we found was the combination rocket launcher/chaingun. The rockets are powerful ranged weapons that pack considerable splash damage, so even a near miss can inflict damage on the enemy. The chaingun is especially useful for close quarters because the high rate of fire usually means you can land a few rounds on the target. And if you have the quad-damage power-up, the chaingun is incredibly lethal; a few rounds will cut down pretty much any opponent. However, the most interesting weapon is the painkiller. The primary fire mode, known simply as "pain," deploys a whirling blade that can be used as a melee weapon. The secondary fire mode, known as "killer," releases the spinning blade so that it flies toward an opponent. It then releases an energy beam that travels to the metal blade, killing anything in the path, much like a trip wire. The painkiller is a bit difficult to master, but it seems like a powerful weapon if used by a skilled player.

It certainly appears that developer People Can Fly is going to deliver the lightning-fast first-person shooter that it promised. The multiplayer gameplay in Painkiller reminds us a lot of the frenetic action found in games like Serious Sam and Quake, so there's very little room for tactics or strategy. What you need to do is think fast on your feet--and you can't miss. The new multiplayer modes, particularly PCF, should also definitely offer a change of pace from the standard deathmatch and team deathmatch games. You won't have to wait much longer to experience Painkiller for yourself, because the game is set to ship by the middle of the month. 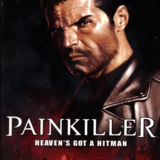