4am Entertainment announces that it will publish InterActive Vision's flying WWII sequel in the UK next year. First screens inside.

4am Entertainment has today announced that it will publish Pacific Warriors 2: Dogfight in the UK in the first quarter of 2004. The World War II flight simulation, which is currently in development at Denmark-based InterActive Vision, will allow players to fly for the United States or Japan in a series of missions that take place after the events of Pearl Harbor.

Pacific Warriors 2: Dogfight will feature a total of 50 missions (25 for each side), with varied objectives that include dogfights, bombing runs, and reconnaissance. As they progress through the game, players will be awarded points based on their performance that can then be spent upgrading their planes. Intriguingly, players will have the option to change aircraft during missions. During the training mission, for example, the training will be cut short when a radio message warning of incoming enemy fighters is received. Since the player's current plane is primarily designed for bombing runs rather than dogfights, the player will have to decide whether to stay in the air or to return to the airfield for a more suitable fighter plane.

We'll bring you more information on Pacific Warriors 2: Dogfight as soon as it becomes available. 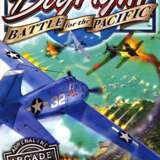