If you can put a corporate mascot into a game genre, chances are Pac-Man's been there and done that. There have been Pac-platformers, and both real and virtual Pac-pinball games, Pac-puzzlers, and a Pac-party game, but until now, Namco's golden goose has never tried his figurative hand at the mascot-staple kart racer genre.

Namco today announced plans to rectify that oversight with Pac-Man World Rally for the PlayStation 2, Xbox, GameCube, PSP, and PC. World Rally lets players get behind the wheel of a go-kart as Pac-Man or one of 14 other Namco characters, powersliding around courses alone or against a friend. In keeping with the Pac-Man theme, players will also be able to pick up power pellets that let them then eat other players. Glossing over the worrisome issues of Pac-cannibalism, Namco announced a summer 2006 release for World Rally.

Salt Lake City-based Smart Bomb Interactive is handling development of the game. Currently the company is also working on a Snoopy and the Red Baron game for Namco due out in the third quarter of 2006, as well as Scumbag Racing, based on the hot rod monster art of Stanley Mouse. 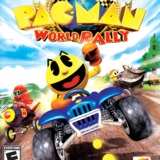