Over G Fighters flying onto Xbox 360

Last December, Ubisoft had the distinction of announcing the first combat flight sim that would hit the Xbox 360 in the US, Blazing Angels: Squadrons of WWII. Today, the company announced it would also publish Over G Fighters, the second North American entry into the genre for Microsoft's next-generation console. Though still unrated, the game is set for release in June 2006.

Over G Fighters' single-player campaign will sport more than 80 missions set during a fictional "modern-day global conflict." The missions will be set in the skies above various international locales, and will feature branching submissions. Up to eight players can join in multiplayer or cooperative levels via Xbox Live.

GameSpot took Over G Fighters for a test flight at the 2005 Tokyo Game Show--read our hands-on for additional on-site intel. 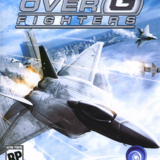