Ouya devs open up on sales figures for new console

Results vary, from TowerFall creators selling 2,000 game units at $15 each to Knife Media breaking even with its twin-stick shooter Red.

Developers for the recently launched Ouya console voiced their opinions on Edge and Gamasutra about how each of their various titles have sold so far.

Developer Matt Thorson, who created TowerFall, said that the game performed well, selling 2,000 units at $15 each. "Sales have been surprisingly high for a new game on a new console. The game has definitely proven itself on Ouya, I think there's enough demand to warrant bringing it to PC," he said.

Developer NimbleBit's title Nimble Quest was downloaded 6,508 times and was purchased 122 times, bringing the total profit of the game to $427. Cofounder David Marsh said that he would recommend the Ouya for indie developers who are familiar with the Android and are curious about the console. "It's probably not going to be a huge source of income compared to other platforms, but it's dead easy to submit a game and get it into the store. It's the only console right now with a truly open store, which makes it interesting and worth supporting if you want to see more open platforms. It's also a great device to have just to check out all sorts of neat experimental multiplayer games that are already popping up. I think it's a step in the right direction," he said.

Knife Media's cofounder Jack Shiels said that sales for the company's game, twin-stick shooter Red, were adequate at best. "We broke even within two-and-a-half-weeks, whilst sales are currently sitting at just below 400. Right now that doesn't seem like a whole lot, but there aren't a significant amount of Ouyas out in the wild right now. I reckon by year end we will have a clearer picture," he said.

Ryan Wiemeyer, co-founder of the team The Men Who Wear Many Hats, said that the game Organ Trail sold about half of what his low-end predictions were. "Last I checked we were at 501 purchases from 13,112 downloads (a 3.8 percent attach rate). This accounts for about 0.1 percent of our total Organ Trail sales to date (which is over 400,000). So, I don't even know if it was worth the man hours yet. Then again… Organ Trail was a pain to add controller support to and that was the bulk of the port."

For more information on the Ouya, check out GameSpot's coverage on the console. 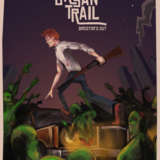