We get our first look at Outlaw Tennis, the newest chapter in the over-the-top sports franchise.

Having already ventured into the pastimes of golf and volleyball, Hypnotix's Outlaw sports series sets its sights on the tennis court with Outlaw Tennis, the most recently announced game in the franchise. If you've ever played an Outlaw sports game, then you'll already know the hallmarks of the series: lots of over-the-top action and similarly over-the-top humor. For example, imagine playing tennis with exploding balls, and that will give you an idea of what's in store.

Outlaw Tennis follows the same formula found in other Outlaw games. You choose an avatar from a cast of colorful and sassy characters, and then you compete in a range of various sites that are both specific to the sport in question and feature many different fantastical settings, from the deck of an aircraft carrier to the streets of a Mexican resort to a Mad Max-like desert arena. The cast of characters is taken largely from existing Outlaw games, though there will be some notable new additions, including the heavyset Heavy G. There's also going to be a lot more latitude in customizing your character, because there are now plenty of different clothing options available, from tops, bottoms, shoes, sunglasses, and even styles of racquets. Some of these new characters and clothing options will be unlockable throughout the game.

Fans of consoles will be happy to know that the controls for Outlaw Tennis will be practically identical to conventional tennis games, such as Top Spin. And if you turn off many of the unconventional gameplay options, Outlaw Tennis will feel very much like a conventional tennis game. Of course, it's these unconventional options that give Outlaw Tennis its colorful nature. For example, you can turn on an exploding ball that's set to a timer. The trick to gameplay then becomes to make sure the ball is in the other player's court when it explodes. You can also turn on a Pong-like blocker that moves back and forth across the net. Hit the blocker and your ball will be deflected back toward you. There are also weather options available so you can turn on the elements. Then there are the different gameplay modes. There's casino, in which money is added to the pot every time the ball goes over the net. In casino mode, the winner of the point gets all the cash. Then there's a football mode, where players gain yards every time they hit the ball over the net. Other modes include baseball, pinball, and Ping-Pong. And, of course, you can create a wide variety of custom games by toggling the various settings accessible to you. The camera controls are quite flexible, and you can choose from the traditional top-down view to a behind-the-back camera, depending on your tastes.

And it wouldn't be an Outlaw game if your characters didn't throw fits. If you're losing a match, your character will steadily lose momentum, and if he or she loses momentum entirely, he or she can snap. In one nice detail, you can now turn off the outrageous behavior of your characters, because while amusing, fans often felt that watching the same antics over and over was repetitious and detracted from the flow of the game. If you want, however, you can get into fights with another player. If this occurs, you'll control your character much like you would in a fighting game.

Both the Xbox and PlayStation 2 versions of the game will feature online multiplayer support for up to four players, so you can get start looking for a doubles partner now. You'll also be able to play with up to three other players offline on a single PS2, assuming you have enough controllers and a multitap peripheral. With its colorful content and trademark over-the-top gameplay, Outlaw Tennis looks like it will be a solid addition to the franchise. Both the PS2 and Xbox versions of the game are scheduled to ship in May. 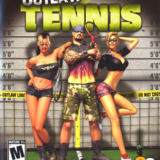