Outcast IP returns to original developers ahead of franchise revival

More details on the revival of the long-dormant adventure series will be announced soon, says Appeal studio founders.

The IP rights for the 1999 PC adventure Outcast have been purchased by the game's original founders, the trio of developers have announced.

Yann Robert, Franck Sauer, and Yves Grolet said that they finalised an agreement with former rights owners Atari Europe to purchase the intellectual property rights to the series and that the trio intends to revive it.

Developments for the series will be announced soon, said the trio.

Outcast was originally released for the PC in 1999 and was one of the first games to feature a large open world alongside open-ended gameplay. A Dreamcast version of the game was once planned but was subsequently cancelled after poor sales.

The third-person adventure took place on the planet Adelpha, a parallel version of Earth inhabited by the Talan. The player took the role of human Cutter Slade, who travels to Adelpha to close a black hole threatening to destroy Earth.

The series' original developer, Appeal, went bankrupt trying to develop Outcast 2 for the PlayStation 2. A report from 2002 stated that the sequel was cutting many of the series' puzzles and focusing more on its action elements.

GameSpot awarded Outcast its Adventure Game of the Year award in 1999. 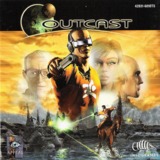