This month marks the 35th anniversary of the Super Mario series, and Nintendo is celebrating with a ton of upcoming releases and events. As revealed during the company's surprise Super Mario Nintendo Direct, a Super Mario 3D All-Stars collection--which includes Super Mario 64, Super Mario Sunshine, and Super Mario Galaxy--is releasing later this month on September 18. But before then, Switch Online subscribers will be able to play the original Super Mario All-Stars on the hybrid system.

The classic Mario compilation is now available on the Nintendo Switch Online SNES library. Originally released in 1993, this collection features remade versions of four classic NES Mario games: Super Mario Bros., Super Mario Bros. 2, Super Mario Bros. 3, and Super Mario: The Lost Levels. The latter, as is commonly known now, was the original Super Mario Bros. 2 in Japan, but it was not released outside of the country at the time, making the All-Stars version the first chance most Western fans had to play it.

Featuring 4 classic Mario games, Super Mario All-Stars has all the 2-D action you could ask for! This enhanced SNES collection of NES classics is available now for #NintendoSwitchOnline users! https://t.co/Fu9fDFqXpr pic.twitter.com/73vMDdAXJ9

The SNES library is one of the perks included in a subscription to the Switch Online service. Individual memberships cost $4 USD for one month, $8 USD for three months, and $20 USD for one year. Nintendo also offers an annual family plan for $35 USD that covers up to eight Nintendo Account holders, even across multiple systems.

All-Stars isn't the only exclusive Mario game that Switch Online subscribers will get to play soon. On October 1, Nintendo is also releasing Super Mario Bros. 35--a limited-time, battle royale-inspired version of the original Super Mario Bros. Similarly to Tetris 99, 35 players run through classic Mario stages and compete to be the last one remaining. Defeating enemies will drop them in opposing players' screens, and you can use the right stick to target different players. However, Super Mario Bros. 35 won't be a permanent release; the game will only be playable until March 31, 2021.

Nintendo has a lot more planned for Mario's 35th anniversary, including Mario-themed events in other Switch games. Splatoon 2 is getting a brand-new, Mario-themed Splatfest in January 2021, and Mario items are coming to Animal Crossing: New Horizons. You can catch up on all the biggest announcements in our Super Mario 35th Anniversary Direct recap. 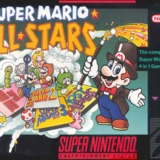