What do werewolves, dragons, zombies, and vampires have in common? Besides being cool--and by cool we mean totally sweet--they now appear in a tactical RPG alongside the infantry and armored vehicles of the Third Reich. We recently had the opportunity to dig in deep and do our best to stop the Blitzkrieg with a team of supernaturally-powered Allied soldiers in Atlus' upcoming Operation Darkness, and we bring back tales of a very different version of World War II.

In the early stages of the war, young friends Edward and Jude are stationed in North Africa as members of the British army. When their unit is tasked with the interception of a vital piece of enemy intelligence from the forces of the Desert Fox Erwin Rommel, commander of the German Afrika Korps, things take a tragic turn. Their entire unit is wiped out in a Panzer ambush and Edward is nearly killed, only to be saved by the timely aid of a friendly SAS unit and an emergency blood transfusion from James Gallant, its commanding officer. Soon, Edward and Jude find themselves transferred to Gallant's mysterious unit, the Wolf Pack, where they learn the dark secrets of Hitler's success and are caught in the middle of a centuries-old conflict.

Of all the games in its genre, Operation Darkness is most similar to the Fire Emblem series in that it features a very character-driven story that relies heavily on dialogue to paint a number of personal backgrounds against an overarching backdrop of war. But beyond that and the standard grid-based movement system, Operation Darkness does a good job of standing apart from its colleagues.

Because this is a war fought with guns and not swords, nearly every attack performed is ranged, and to compensate for this, maps are often so large that they can require multiple turns of maneuvering before your troops are even within range to score a hit. Though different types of weapons will have different optimal ranges, you are always informed of the to-hit chances of your attack landing, and in this way, there is a ton of opportunity for strategy--do you chance the lucky shot or wait a turn and risk counterattack for a sure hit? Beyond gunplay, however, there are a variety of other types of attacks to use. Your units each feature different special powers, such as the ability to throw fireballs or reanimate dead allies, and some of them can transform into full werewolves for incredible boosts to strength and movement range.

More so than in other tactical RPGs, taking cover and outflanking your enemies are important tactics to master because of the incredible effect that the battlefield's environment can have on combat. Buildings, trees, sandbag walls, towers, and more litter the terrain and provide ample places to hide from incoming fire. Small cliffs can provide bonuses to range against targets below, and you'll often find yourself assaulting enemy positions with hidden perimeter mines, which can be seen only if your cursor happens across them. But just as the old adage goes, the shortest path between two points is a straight line, and this holds true even in Operation Darkness. Most of the obstacles on the battlefield are fully destructible if your gun packs a high-enough caliber, and you may actually find it easier--and certainly more fun--to tear down those trees than to go around them.

Another great new feature in Operation Darkness is the oddly named Cover system. Before you perform any other actions with one of your units, you can select from one of three Cover settings, which places your soldiers in a holding position but grants them special abilities. Cover Move lets you set a trigger--either on another unit or over a specific area--and then select a location to move to in a radius larger than your normal move distance. When the trigger is tripped, either by the specified unit moving or by the area being moved through, your Cover Move soldier will automatically go to the spot you assigned him to. In this way, you can have entire groups of soldiers move simultaneously, rapidly changing the face of the battle. If you assign someone to Cover Ambush, anytime an enemy unit moves into their range, they will automatically fire on them. Similarly, Cover Attack will cause your unit to fire on anyone in range that opens fire on an ally. When used properly or in concert with each other, those last two options can absolutely decimate a larger enemy force.

Unlike other, similar games, Operation Darkness forgoes the traditional isometric view, instead opting for a fully 3D camera that allows for full control and some dramatic cinematic shots of weapons being discharged. Unfortunately, this camera is more often than not a greater threat to the Wolf Pack's mission than the SS due to its unwieldy nature--it's incredibly difficult to get a proper view of enemy positions relative to your own or in the line of sight in order to set up attacks.

Operation Darkness will be available in stores on June 24. Look for our final word once it hits the shelves, but if you can't wait that long to try out this unique alternate-history tactical RPG, be sure to download the demo currently available on Xbox Live Arcade. 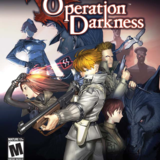