Open-world Cabela's game out this year

According to Activision community manager Dan Amrich, players will explore an open-world Africa and can wander on foot on in their vehicle, able to jump out whenever they wish.

In Cabela's African Adventures, players will hunt lions, leopards, rhinos, buffalo, and elements, among other animals.

No developer for Cabela's African Adventures was announced and a representative for Activision was not immediately available to comment.

The most recent entry in the series was 2012's Cabela's Dangerous Hunts 2013. 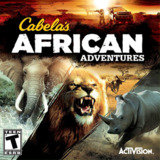