OnLive: Inside and Out

Check out our coverage of the for more information about this new technology!

Imagine playing a computer game without any hassles. Drivers, troubleshooting, installations, compatibility, performance--all thrown out the window. Upgrading? A thing of the past. All you have to do is click on the game, and seconds later, you're playing. That's what OnLive claims to deliver. Should it work half as well as advertised, expect to see the gaming world thrown into upheaval by a box no bigger than a deck of playing cards. The story gets even more unbelievable when you factor in price. According to company reps, OnLive intends to significantly undercut every existing console on the market.

At its core, OnLive is a subscription service similar to cable TV or Netflix. In other respects, OnLive is what you get when you pump something like YouTube full of steroids. Instead of just watching a pile of videos, you're streaming gameplay at HDTV resolutions and controlling your character in real time. You get Crysis on your HDTV at the highest-quality settings--run by a computer that's hundreds of miles from your doorstep. It's really no wonder Rearden Labs spent the better part of a decade perfecting and designing OnLive.

Whenever a console comes out, we tend to dig in to all the gritty details--pixels pushed, mips mopped, and so forth. Sony has volumes written about its Cell processor, just like Microsoft and its tri-core CPU, not to mention their associated GPUs. By contrast, the humble little OnLive MicroConsole comes with practically nothing--just two USB connectors, a network jack, some AV outs, and some random bits and bobs stuffed in there. To make things even stranger, OnLive will run on just about any PC or Mac through a Web browser plug-in without the MicroConsole. Install the OnLive program and you're done. According to the company, even the lowly netbooks will run the newest games with high-quality details and excellent frame rates. 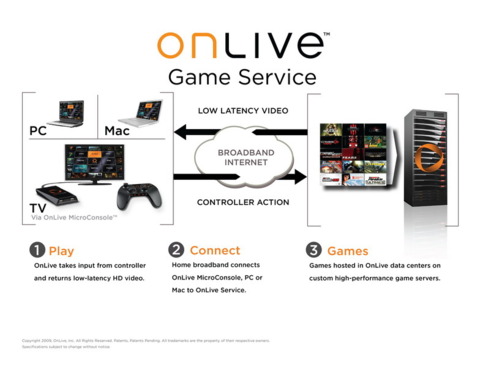 Here's how it all works.

All the magic happens elsewhere, and the hardware sitting in those rooms is considerably more powerful than anything the current consoles offer. Gaming PCs in far-off server rooms sit filled to the brim with SLI setups, quad-core CPUs, gobs of RAM, and ridiculous RAID arrays to make load times a thing of the past. In its racks, OnLive has a slew of machines ranging from the mundane for simpler games to SLI rigs to power the most demanding games. Every six months, OnLive will upgrade the computers to take advantage of new CPUs, GPUs, and more to give you access to the most powerful hardware available.

Surprisingly, OnLive already has competition on the horizon. A startup by the name of OTOY aims to provide high speed gaming, HD movie playback and more, by using a web browser plugin. The driving force behind OTOY is AMD’s Fusion Render Cloud, a supercomputer class machine capable of petaflop processing power with over 1,000 GPUs. In a conversation with Jules Urbach, OTOY’s CEO, he mentioned that OTOY will be entering beta in the summer and should be up and running in the year.

Our experiences with Crysis and Burnout were quite favorable. Crysis looked fantastic and ran at a great pace. Burnout's fast-paced driving felt a little off, but it didn't detract from the gameplay too much. We'll likely get a better idea of how the service behaves in a large-scale environment when we get closer to launch. OnLive will have a beta of the system starting in the summer and will officially launch in the winter.

As goes the usual refrain, it's all about the games. In the case of OnLive, it's all about third-party support. If the OnLive folks make any games, they certainly aren't aiming to outdo titles like Gears of War or Metal Gear Solid 4. OnLive's game backbone lives off of what's currently available on PCs. Pretty much anything built for the PC can run through OnLive with relatively minor tweaks. Currently, heavy hitters like Electronic Arts, Ubisoft, Take-Two, Warner Bros., THQ, Epic, Eidos, Atari, and Codemasters have all signed on to provide games from their PC stables. Should the experiment succeed, we imagine anything that comes out on the PC will be mirrored onto OnLive in short order.

At the Game Developers Conference 2009, OnLive demonstrated 16 different games, including Crysis and Burnout.

Additionally, developers will be able to easily launch game betas before developing a full game to determine whether there's interest in a particular game or an experimental style of play. The result gives gamers a better end product, while lowering costs for both gamers and developers.

OnLive will let gamers buy, rent, and play trial versions of games. The company has not announced any pricing scheme for rentals or purchases. And as we mentioned before, all gameplay will happen instantly. Once you click "buy" or "rent," you'll be playing in the span of time it takes you to hit the play button.

OnLive's streaming technologies allow it to do some crazy stuff. Aside from being able to watch clips of games to see what they're like, you'll be able to spectate any game being played on the system. OnLive also lets you show off your coolest moments via the Brag Clip system. The service automatically records your gameplay at all times, and anytime you do something that looks cool, you can press a few buttons and save the last 15 seconds of footage. At that point you can share your saved clip with other friends who are part of the OnLive service.

Every console brings its own controllers to the game. OnLive does as well, but it's not really required. OnLive's MicroConsole supports up to four wireless OnLive controllers. The controller looks similar to the Xbox 360 controller in terms of buttons and layout. The controller will also double as a remote control for video playback. OnLive representatives also mentioned that the controller was designed to work with much lower latency than third-party wireless controllers.

OnLive's control scheme is probably the most flexible of any console. Pretty much any USB wired controller will work without a hitch--including the wired Xbox 360 controller. Since we are talking about PC games, keyboards and mice will most certainly function. If you have a wireless controller that has a USB receiver made for a PC, it should work as well. The MicroConsole will also accept a USB hub to increase the number of devices you can plug into it.

The OnLive MicroConsole will be priced well under all existing home consoles. The company hasn't mentioned any specific price points, but it isn't hard to imagine OnLive gunning well underneath the Wii. The browser plug-in for PCs and Macs will be free.

Unlike other consoles, which have one cost attached to them, OnLive has a base cost (or none, if you have a computer) plus a subscription fee. The real number we have to keep an eye on is what it costs to keep the service alive. Representatives have yet to announce how the subscription model will work, but they did reveal that there will be multiple price points.

Also unlike other consoles, OnLive improves over time. Top-of-the-line computers will be rolled into the server farms on a constant basis. Since video cards and CPUs update on a six- to 12-month cycle, users will get better performance for the same price as time goes on.

Should OnLive succeed, the gaming landscape and more could change considerably. Predicting all the downstream effects is exceedingly difficult. Console upgrades could come to a halt. Outside of gaming, you could watch or buy movies, watch TV shows, listen to music, and much more. Like OTOY, the fact that OnLive can stream live gameplay means that it could act as a full-fledged computer at the flick of a switch, with its servers storing your data. Go from typing papers, to playing Crysis, to watching CSI, all from a tiny box. OnLive has an interesting future if everything works according to plan. We'll keep you updated on developments as we get closer to the beta this summer.

There are 835 comments about this story
Load Comments (835)