What does a company do when the previous cover athlete for a popular, annual sports title helps his team win an NBA championship? Sign him again.

2K Sports today announced that Shaquille O'Neal, the outspoken center for the world champion Miami Heat, will return as the company's spokesperson for its NBA 2K series and grace the cover of NBA 2K7. The game is scheduled for release in September on the Xbox 360, PlayStation 2, and Xbox.

"Shaquille O'Neal remains one of the most dominant, exciting, and charismatic athletes in the NBA," said 2K Sports' VP of marketing Erik Whiteford. "His dominating game and winning attitude make him the central figure on every team he is a part of...We're very pleased to be working with Shaq again with NBA 2K7."

Shaq is no stranger to gaming--in fact, he had the honor of being on the cover of a few games before the turn of the century. In addition to being on the cover of NBA 2K6, "Daddy Diesel" was on the cover of Midway's 1999 game NBA Showtime: NBA on NBC. The big man also had his own game--Shaq-Fu, a fighting game that had nothing to do with basketball. (Fortunately, no game adaptations of his films Kazaam or Steel were ever made.)

For more information on NBA 2K7, dribble over to GameSpot's previous coverage. 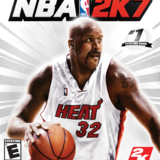