OlliOlli2 Revealed: Can Roll7 Repeat the Trick on PS4 and Vita?

London indie studio Roll7 has revealed OlliOlli2, the sequel to its finger-aching skateboarder that devoured the lives of perfectionists.

Much like the original, which was awarded GameSpot's Game of the Month in January, OlliOlli2 will begin as a console exclusive on PlayStation 4 and PS Vita.

After six months from release, the studio is free to port the game to other systems, including Xbox One and PC, which is perhaps a little surprising since Sony is funding the project.

"Sony insisted there should be a sequel," Roll7 director Simon Bennett tells me, "but they really haven't been pushy about what we do. As long as we're on PlayStation first, we're fine."

GameSpot was given a chance to play an early build of the 2D skater during a private demonstration at Roll7's Lewisham studio, and what is immediately noticeable is that the controls are as fantastic as ever; responsive, straightforward, and reliable enough to make the controller disappear and put players under its spell.

Along with a visual overhaul (which I'm not convinced is necessarily an improvement), OlliOlli2 introduces new tricks and, for the first time, a multiplayer mode.

"There are whole new ways we can challenge the player," Bennett adds.

Key to that broadened challenge is adding in manual tricks, which allow players to continue their combo chain after landing.

In the original OlliOlli, points scored from a trick would only register if the player landed safely, which required pressing 'X' the precise moment the board hits the ground. This meant that building a monster combo became a painful, relentless thrill, with the swelling score multiplier only adding to the pressure of landing correctly. Veterans of the game will recall exhilarating moments where more than a million points hinged on the split-second timing of one single landing.

In OlliOlli 2 the standards are still merciless, but this time players can pull left or right on the analogue stick to modify the landing into a manual, which means your hard-earned combo multiplier can continue even further, opening up the possibility of carrying epic, level-spanning combos.

Another key addition is ramps. In a manner similar to the wonderful iPhone game Tiny Wings, your momentum heading into a ramp will equate to your height on departure (providing, of course, that your timing is perfect).

Though it may appear like a cosmetic addition, the ramping system allows for more verticality, meaning levels can split into different 'zones' stacked on top of each other. For those who recall the delight of scaling the high-rise scaffolding in Neon City in the first game, this addition could be particularly promising.

Roll 7 is adding five new levels to OlliOlli2, with the game themed on its alternative version of Tinsel Town, known as "Olliwood." Each level offers ten amateur and pro challenges, while the game's popular Daily Grind mode returns (giving players one chance each to play a certain level and tallying all the scores online). Roll7 also wants to match the standards of OlliOlli's laid-back soundtrack, again picking a group of unsigned, up-and-coming artists.

There was no demonstration of the multiplayer mode, and I'm not entirely convinced by the pitch yet: It's a four-player split-screen score attack, where players chase each other to reach a certain number the quickest. Will that underlying pressure of performing harmoniously become even more intense when other players are competing too? I'm not sure, especially considering OlliOlli is at its best when absorbing the player into a Hai Krishna-like trance of "retry, retry, retry until it's mastered." Fighting through a string of messy tricks and misses might not be so thrilling, but if Roll7 has proven anything over the past year, it's that the studio knows how to pull off the most difficult tricks.

OlliOlli2 is expected to ship on Vita and PS4 in spring 2015. Take a closer look via the video above. 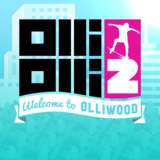