Bringin' back PS Home... or at least part of it.

Remember PlayStation Home, the bizarre, Second Life-like social area that Sony released on PS3? You made an avatar and wandered around a city, interacting with other players and playing mini-games in the various add-ons and expansions released for it. Although PS Home was shut down a couple of years ago, one third-party social space, called Aurora, is alive once more.

Developer nDreams has licensed Aurora content to developer Atom Republic, which has recreated it on PS4 and PC as a part of its most recent game, Atom Universe. The title is more of a virtual world than an actual game, and Aurora is an expansion to it. Aurora gives you access to everything that was in the original PS Home version, including its "floating archipelago" and the mini-game Orb Runner. Check out the video below to get an idea of what Aurora is.

According to the developer, Aurora has been recreated from its original, PS Home-era assets. In addition, nDreams has added challenges to Orb Runner, as well as new rewards for playing the game.

Atom Universe is free-to-play, and the game is cross-platform across Steam and PlayStation Network. Aurora is free, too, although you can pay for a new "private space" which comes with three extra items. 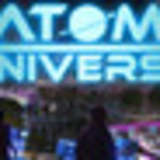