October's Free Xbox One, 360 Games With Gold Titles Out Now

Looking for something new to play?

The next wave of free Xbox games are currently available for Xbox Live Gold subscribers. The second batch of October 2017's free Games With Gold titles started showing up recently; as announced previously, these include first-person puzzle game The Turing Test on Xbox One and Medal of Honor: Airborne for Xbox 360. That game plays on Xbox One through backwards compatibility.

Also of note is that Fullbright's adventure/exploration game Gone Home is free on Xbox One all month long. You can see the full rundown for October 2017's Games With Gold lineup below. Click any link and it will bring you to the game's Xbox.com download page.

If you're looking for something else, Microsoft has rolled out the usual Xbox weekly deals and a special Xbox Halloween sale. Also, you can see October 2017's free PlayStation Plus games here. Additionally, Microsoft has announced the lineup of free November Games With Gold titles, which include TrackMania Turbo. 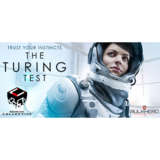