Announced via this month's cover story, South Park: The Game is in development for the Xbox 360, PlayStation 3, and PC, with THQ handling publishing duties. GI characterized the game as a "full-scale" role-playing game, where players assume the role of a new kid in town tasked with making friends and defending South Park from a "wide range of threats."

The magazine cover features the show's iconic principle characters--Kyle, Stan, Cartman, and Kenny--surrounded by the quartet's supporting cast. The pond's reflection alters the scene, showing the boys in fantasy-inspired garb among a handful of different presumed "threats," including a dragon, Satan, Manbearpig, and more.

In addition to writing the game's script and performing voice-over work, show creators Trey Parker and Matt Stone are overseeing development. South Park: The Game is set for release sometime in 2012.

[UPDATE] Following the publication of this article, THQ officially announced South Park: The Game, confirming that it will be available during the back half of 2012 on the Xbox 360, PS3, and PC. 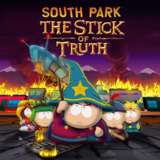 South Park: The Stick of Truth
Follow
$14.72 on Walmart
Buy

There are 279 comments about this story
Load Comments (279)