If you thought your computer was powerful, wait until you see what Oblivion does to it. Read on to see how you can improve your in-game performance.

Oblivion will push your computer to its breaking point. Numerous users have tried to squeeze more performance out of this game by tweaking many in-game settings and hacking various files to eke out a few extra frames. A few brave souls have even gone into the inner workings for the promise of better image quality - and with quite a bit of success.

However, for most users, the task will be to squeak out as many frames as is humanly possible. With that in mind, we made our test demo rather stressful, to indicate what parts you would need to upgrade. Our goal was to ensure playability even when the sword swinging gets rough and tumbly.

Oblivion does not come with a built-in test with which to measure performance. We had to improvise by recording our frame rate with FRAPs on a consistent repeatable path. Our twenty-three second long in-game test run works its way through the Chestnut stables map section of Oblivion. We chose the outdoors as the game is considerably more demanding in fresh air environments. The stables also provided numerous characters and animals, which you are sure to encounter while playing the game. We could have tested with a combat heavy scenario, but maintaining consistency would have been difficult.

Oblivion randomly generates trees, as a result, our tests have a built in error that we cannot eliminate. Fortunately, our results didn't vary too much, at most, plus or minus two frames per second.

Game Settings
If you're not in the mood to upgrade your computer, changing a few settings might give you a little speed bump. Oblivion will tax even the most powerful computers. We experimented with the different in-game graphical settings to see which options affect performance the most.

Image Quality
Be sure to check out the three pages after the settings section to see exactly what kind of eye candy you'll be giving up in order to gain a few frames. Some of the images show staggering differences; the term "night and day" would hardly do them justice.

Graphics
Oblivion likes big beefy graphics cards, but if you're willing to give up a few settings here and there, you can get away without having to spend your unborn child's college tuition for a better gaming experience. All totaled, we tested almost twenty different video cards, everything from the Radeon X1900 XT down to the GeForce 6200 TC.

CPU
Oblivion requires a minimum of a 1.7GHz Pentium 4, which is rather paltry considering the multi-gigahertz processors available today. We didn't have a PCI Express-enabled test bed that had that slow of a CPU, but we did use our multiplier unlocked Athlon 64 FX-60 to see how well the game performs across different CPU speeds. We reduced the speed of our Athlon 64 down to 2.0GHz, and then further down to 1.2GHz to see how the CPU scaled with performance.

Memory
We varied the amount of system RAM (512MB, 1GB, and 2GB) on our test bed to see how much memory the game needs to run effectively.

Oblivion has a long list of tweakable settings, but few yield large performance benefits. The notable exceptions are the view distance and shadow settings. Reducing the view distance and turning off settings like self-shadowing will improve performance considerably. We also found that resolution barely affects frame rates on powerful systems, but lesser systems will take a hit as you increase the resolution. The other graphics settings didn't seem to affect performance very much in our test scenario unless we reduced draw distances.

We highly suggest you keep a setting called "distant lands" enabled to preserve gameplay. The option is available only if you keep view distance at its maximum. We're not kidding when we say that half the game disappears when you disable this setting. You'll get quite a bit of performance if you turn it off, but the trade-off isn't worth it. If you do decide to turn it off, you might as well disable HDR as well to squeeze out even more performance, as disabling distant lands also makes HDR less noticeable.

We only tested settings available in the game's "Video" menu, but there's a whole world of settings available to those brave enough to venture into the game's initialization files. You can find them in the official Oblivion forums and various online tweak guides. Remember to backup your files if you decide to delve deeper. 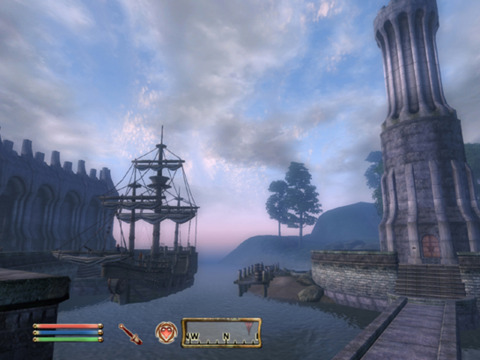 More than half the world disappeared when we disabled distant lands but kept the view distance sliders at their maximum levels. If you disable distant lands, you might as well turn off a few other settings, as the world looks quite drab and lifeless without distant lands. 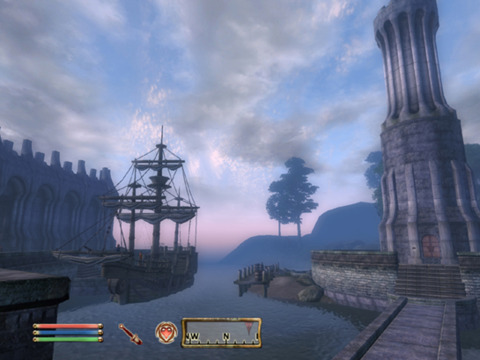 The difference between these two settings is almost negligible in this scene. 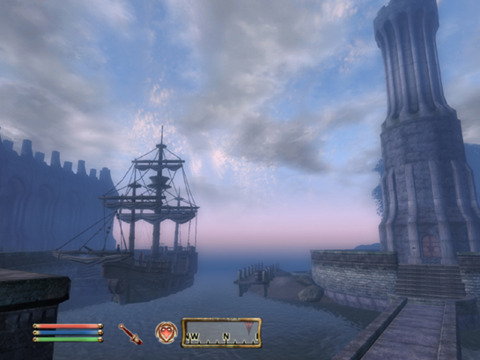 Without that remaining tree in the distance, you'd think we were looking at a vast ocean. 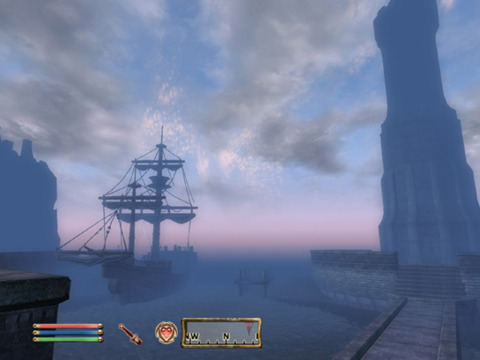 Quarter-view distance chops away portions of the boat, and the world takes on an even murkier look. Try to keep your view distance settings maximized, unless you actually prefer wandering around in a fog-filled world. 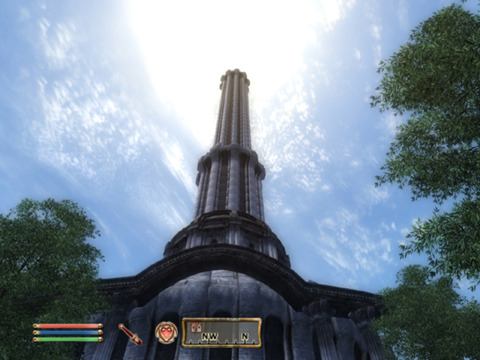 Didn't your mom ever tell you not to look at the sun? The difference between HDR and bloom is quite noticeable. The massive sunspot turns into a murky white cloud with bloom enabled. The game doesn't allow you to enable both settings at the same time, so you have to pick one or the other. We prefer HDR, and the performance hit is acceptable. 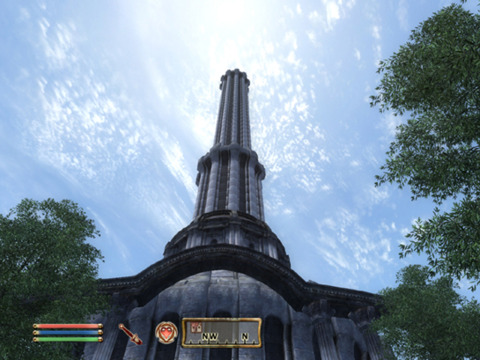 Bloom looks considerably better than nothing though. The non-bloom sun looks more like a daytime moon.

Do we really have to say anything at all? HDR. Note how the tower loses its sun-drenched color without HDR.

Shadows vs No Shadows 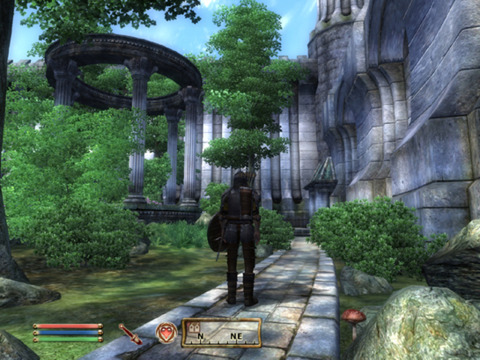 Shadows greatly improve how scenes look, but they also come at a rather large performance cost. You can disable shadows to get back a few frames if you don't mind a bright and shiny world. 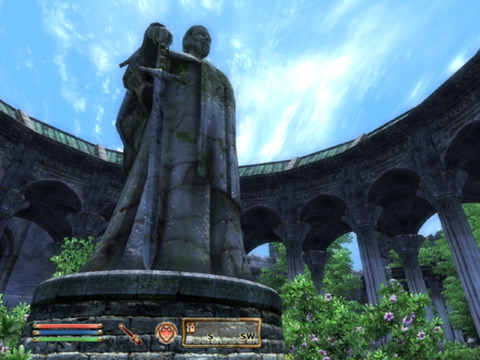 Texture quality makes quite a difference in Oblivion. If you're going to drop down to small texture sizes, make sure it's one of the last things you do, the drop in image quality is tremendous. The entire statue loses all of its detail, and all the cracks and fine features disappear completely.

Self Shadowing - Nvidia vs ATI 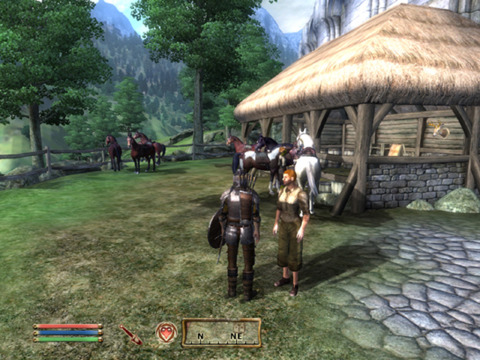 During the course of our testing, we noticed that the ATI video cards render self-shadows in a peculiar fashion. The horses have zebra-like stripes, and we also noticed alternating arcs on our main character's back as he moved. The Nvidia cards have their own self-shadowing issues, but they aren't quite as pronounced. The woman standing next to the main character has what appears to be a five o' clock shadow on our Nvidia cards.

Oblivion is a fairly well-balanced game in that it challenges the CPU and the GPU almost equally. If you have a powerful GPU, you'll need a fast processor to make it shine. If you like playing at high resolutions, a better video card will take you a long way. The ATI Radeon X1900 series cards put up the fastest results, but, as we noted earlier, ATI also has some rendering anomalies with self-shadowing enabled (Nvidia has the same problem, but to a lesser extent). ATI has acknowledged the problem, and is currently working with the developer to fix the issue. ATI's previous generation of chips (the X800, X700, X600, and X300) cannot render HDR at all, we've moved these cards to the bottom of our graphs to indicate this.

The game gives all our midrange and budget video cards a solid thrashing. Anything with 12 pixel pipes and fewer will struggle to render the game with all the settings enabled. You're going to have to give up graphical quality to get decent frame rates on a midrange card. The GeForce 7600 GT walks away the clear winner in this category. The Radeon X700 Pro looks like a winner, but we had to remove it from the main pack because Radeon cards from the X800 era aren't able to render HDR in Oblivion. Once we level the playing fields by turning off all the settings, we see that it lags behind every other card.

Keep in mind that since this game is somewhat CPU bound, your frame rates will scale with CPU power.

Graphics Drivers: Nvidia ForceWare 84.25, ATI Catalyst 6.2. (Due to system instability, we could not use the Catalyst 6.3 drivers)

A fast CPU is crucial to pushing your frame rates to their maximum. The results of our testing show that even with the best video cards available, a slow CPU can pull your frame rates down to barely playable levels. We hit the CPU cap way before we hit the limits of the video card as we increased the resolution.

System memory makes a difference in Oblivion, but the performance benefits don't show up in the benchmarks. More memory helps the game load new scenes quickly and minimizes the hitching associated with excessive hard drive thrashing. We run our tests multiple times, to ensure consistency, but that allows the game to spread the initial memory loading hit across multiple runs. Our initial run with the 512MB system scored 29 frames per second--four frames slower than the final average result. Adding memory will help reduce the severity of that initial hit.

The performance difference between 1GH and 2GB of RAM is even more subtle. Once we had more memory, we noticed that the game stuttered less while dynamically loading adjacent areas in the overworld.