[UPDATE] Shortly after this article was first posted, reports of widespread freezes while navigating the NXE dashboard began to trickle in. The trickle soon became a flood, and a un-scientific survey found that every single GameSpot editor who applied the NXE Update encountered multiple freezing issues with the new dashboard. These seemed to come most often when entering and exiting the avatar editing mode, with three GS editors being forced to reboot three times in under an hour. Requests for an explanation sent to Microsoft were unanswered as of press time. The original story is below.

[UPDATE 2] Microsoft is claiming the freezing issues are being addressed. "As a result of an unprecedented level of member activity around the New Xbox Experience, a small percentage of Xbox Live users may have experienced temporary service issues or delays," the company said in a statement. "We are diligently monitoring and addressing issues as they arise. We appreciate our members' enthusiasm and patience, and apologize for any inconveniences."

In the wee hours of this morning, millions of Xbox 360 users logged on to Xbox Live and began downloading the New Xbox Experience (NXE). First unveiled at E3 in July, the top-to-bottom update does away with the first current-generation console online service's flat blade-based interface and deemphasizes its two-dimensional gamer pictures.

Instead, NXE will feature a scrolling menu system similar to iTunes' cover flow--or, some would say, the PlayStation 3's XrossMediaBar. Its focus will also be three-dimensional avatars, which look like the illegitimate offspring of Nintendo's Miis and the slicker avatars of the PlayStation Home service, which is still ostensibly set to launch before year's end.

Microsoft is heavily promoting NXE, even going so far as to offer qualifying buyers of hard-drive-less 360s a free 512MB memory card or a $20 20GB HDD so they can download it. However, not even the multibillion-dollar resources of the software giant could prevent the service from running into some trouble even before it launched. Many planned features, such as Xbox Live Primetime, were pushed back until after the service went online.

Now, though, the service is up and running after a semi-smooth launch. GameSpot editors encountered a few issues Wednesday morning, primarily in the form of missing game and video content on Xbox Live Marketplace. Often, when content appeared, it could not be purchased. However, by this afternoon, it appeared that Marketplace, which now has a drastically different navigation system, was well stocked with content ranging from Rock Band Track Packs to the new Avatar-based game premium dashboard themes.

Unfortunately, though newer themes, such as those for Gears of War 2 and Fable II, are optimized for the new display, older ones are partially obscured. For instance, the shield in the England 2006 World Cup theme is now bisected by the silver dome, which takes up the bottom half of the dashboard. More top-heavy themes, such as the Alpine Winters theme, are less affected by the new windows-based navigation, which occupies the center of the screen at all times. The British Official Xbox Magazine has compiled a gallery of the most egregiously obscured themes (pictured). 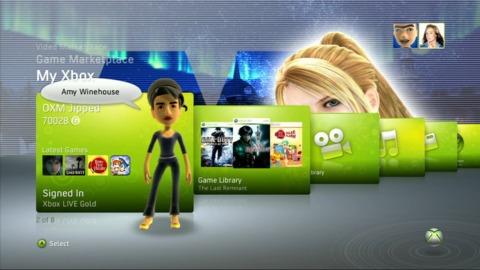 Bigger problems are besetting the Netflix streaming-video service, one of NXE's most heavily hyped features. This afternoon, one day after the California-based rental company admitted "hundreds" of films would not be viewable on the 360, the video service still did not work for multiple GameSpot editors. Those who could get the service functioning found the quality severely limited by bandwidth, with a 1.5 Mbps DSL connection yielding blocky video.

When queried by GameSpot, Netflix reps said that they were unaware of any issues. However, they did confirm that another selection of streaming-video offerings, including the BBC series Red Dwarf, would no longer be available as of December 1. However, unlike the aforementioned films, which appear to all be Sony-owned, Xbox owners won't be the only ones missing out on the next batch of removals. They will no longer be streamable either on PC or other Netflix devices, thanks to what a spokesperson called the "ebb and flow of licensing."

There are 569 comments about this story
Load Comments (569)