Northland to be released in July

GMX Media announces that it has secured North American and European publishing rights for Northland. Screenshots inside.

GMX Media has announced that it has obtained North American and European (in most territories) publishing rights to Funatics' strategy game, Northland. The game is slated to ship in early July in both Europe and North America.

Northland is the sequel to Cultures 2: The Gates of Asgard. The plot of Northland continues the story of Cultures 2, chronicling the adventures of four human heroes during the era of the Vikings. The Norse god Loki becomes a primary character in Northland, and his goal is to manipulate the humans as pawns in his quest for revenge against Odin, who has banished Loki from Asgard. The game features an eight-mission campaign that includes several sub-missions, and another eight single-player missions that are unrelated to the campaign. Six multiplayer missions are also included, for play over LAN or the Internet. We'll have more information on Northland as it becomes available. 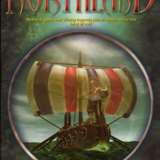