Koei and Soft-World International sign a deal to bring the online strategy title to Taiwan, Hong Kong, and Macao this spring; more games from the two will follow.

TOKYO--After taking on online gaming in Japan, Nobunaga's Ambition Online will make its way to other major game markets in Asia. Koei today said that it has signed a licensing agreement with Soft-World International, a major online game operator in Asia, to distribute the game and provide additional services for the title in Taiwan, Hong Kong, and Macao. The two companies intend to take the game live in these regions starting this spring.

According to Koei, Nobunaga's Ambition Online currently has more than 10,000 subscribers in Japan, where the game is played by both PlayStation 2 and PC gamers.

Koei plans to release future online games in Asia as well, one of which is Uncharted Waters Online, a game still in the development pipeline. Koei is developing that title for a pan-Asian release as well. 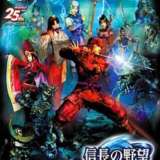