No Really, Necropolis Is A Lot Like Dark Souls 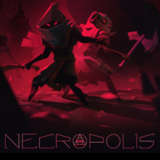 With the unyielding popularity of the Souls games (and the launch of Dark Souls III looming large), tenuous Dark Souls comparisons have grown almost as commonplace as unwarranted Destiny name-drops. But in the case of indie dungeon delve Necropolis, the analogy might actually be apt--at least in certain ways. Structurally, it's nearly identical to a classic roguelike: you must fight your way through an increasingly difficult series of procedurally generated levels, but a single death sends you all the way back to the start with none of the weapons and upgrades you acquired up to that point. Rather than utilizing traditional tile- and turn-based gameplay, however, Necropolis marries its punishing framework to the active sword-and-shield melee combat of something like, well, Dark Souls.

The one very obvious difference between the two games--aside from their decidedly dissimilar aesthetics--is Necropolis' relatively lighthearted tone. Its dungeon may be deep and dark, but its narrative is jokey and fun. Your character is a treasure hunter who's essentially invading the magical storage locker of a missing wizard named Abraxis. In an effort to protect its contents, omniscient dungeon keeper Brazen Head aims to kill you, though he also seems to expect your help keeping the neglected dungeon from completely falling to pieces. According to the development team at Harebrained Schemes, this results in a playfully antagonistic (and largely one-sided) relationship between you and Brazen Head, similar to the dynamic between Chell and GLaDOS in Portal.

The dungeon itself is built around a central elevator. In order to activate this elevator and dive deeper towards completion, you must scour each level for gems, which you earn primarily by killing enemies and exploring the world. Given that Necropolis is a roguelike, environments will be slightly different every playthrough, as the game continually randomizes the type of area, the layout of that area, and the enemies and items you'll find within that area. In addition to being random, each section is also modular, meaning existing pieces can interlock in new ways. If you approach a specific type of glowing blue pillar, you can hit a button to rotate the platform you're standing on, resulting in new pathways to explore.

Thankfully, falling off a platform won't kill you, but basically everything else will. Death, it seems, will be a major part of the Necropolis experience. Though you could potentially be killed by spike traps, magical infections, and other hazards, enemies provide the most consistent threat. Abraxis' dungeon contains both guards and former treasure seekers who got lost, went crazy, and are now out for blood. Interestingly, these two factions will actually fight each other, which clever players might be able to deliberately exploit. Generally, though, they're content to come after you with swords, axes, bows, poison, and even magic wands. The game doesn't contain any dedicated boss battles, but you may run into bigger, badder enemies if you survive long enough.

To that end, combat functions exactly as you might expect: your two hands--which can hold any combination of weapons and shields--are mapped to the bumpers, you can lock onto and strafe around enemies by clicking the right thumbstick, and the face buttons allow you to jump and dodge. You'll have to keep an eye on your stamina meter, though, because every action eats away at your bar, which replenishes only after a potentially lethal delay. Special charged-up power attacks even lower your maximum stamina until you eat or consume the right potion. Ultimately, action seems little lighter and more arcadey than Dark Souls, but the inspiration is pretty clear.

That just leaves perhaps the most important element of all: loot. Necropolis is packed with weapons, potions, scrolls, and other items you can pick off fallen enemies or rescue from errant chests. You can even find rare exotic weapons if you're willing to risk deep exploration. As with the enemies and levels, chests are randomized, but different types of chests pull from different loot tables. A moldy wooden chest will always contain lower level gear, while resplendent, heavily guarded chests will reward you with the best items the game has to offer. Though you can only carry four weapons or shields, weapons do not degrade with use and there's apparently no encumbrance if you want to load up on potions, scrolls, and crafting materials.

Necropolis is packed with weapons, potions, and other items you can pick off fallen enemies or rescue from errant chests. You can even find exotic weapons if you're willing to risk deep exploration.

Not all items will be useful, though. Rotten food, for example, could potentially replenish your health and stamina, but it might also just make you retch, leaving you defenseless for a short time. You could also find unnamed scrolls whose powers won't be revealed until you use them. You can even choose to spend your hard-earned gems buying items from merchants or unlocking special Amulet chests that grant you a small all-around stat boost. But spending gems might force you to collect more gems in order to activate the central elevator and progress, making the game's economy a risk/reward proposition.

According to the developers, a successful play-through should take roughly four to six hours--which, again, means four to six hours without dying once. While that may sound like an appealing challenge to some, everyone else can choose to tackle Necropolis with friends online. The game supports up to four player co-op and allows you to resurrect your fallen comrades without penalty. Careful, though: there is friendly fire, and anyone dropping into a game will start as a base level character, regardless of how far the party has progressed. And whether you're playing solo or with friends, you can always save, quit, and come back later. You just can't die.

As much as I love all the ideas packed into Necropolis, I do have a few lingering doubts after briefly trying the game for myself. My biggest concern is the combat: inputs felt a bit unresponsive, almost as if the game was lagging. As a result, I found it difficult to successfully focus my attacks on a single target when surrounded by several enemies. I also have a few big questions that can't be answered until I spend more time with the game: How much environmental diversity will we see over time? How often is worthwhile loot doled out? Is Brazen Head actually funny? Fortunately, we won't have to wait long for answers. Necropolis is scheduled to launch on PC, PS4, and Xbox One early this summer, with developer Harebrained Schemes self-publishing on Steam and Bandai Namco handling the console versions.

Necropolis
Got a news tip or want to contact us directly? Email news@gamespot.com