Spooky PlayStation 2 title Hayari Gami will be a departure for the normally cutesy publisher.

TOKYO--Nippon-Ichi software is best known for simulation games that feature cute characters, such as Disgaea and Phantom Brave. However, the company is taking a step toward a different direction with its newly announced horror adventure game, Hayari Gami (Trendy Deities).

In Hayari Gami, players assume the role of a Japanese police detective trying to solve a series of murders. The game will consist of four different chapters, where players must solve cases that have to do with urban legends. The cases can either be solved by taking a scientific or an occult approach. The first chapter in the game is titled "Chain Letters" and the second chapter is titled "Kokkuri San" (Table Turning).

Hayari Gami will have a variety of systems, which will add depth to its text-based gameplay. For example, you'll have a stock of "courage points" in each of the chapters, which you'll need to use to make challenging decisions during the game. Players can't recover courage points during each of the chapters, so they will need to be careful about using them. The game also allows players to pick up different keywords during the game, which can be combined to unlock new scenarios.

Hayari Gami is scheduled for release in Japan in the summer of 2004. However, it's very unlikely that Hayari Gami will be making its way to America due to the nature of the game. Gamers with some knowledge of the Japanese language can check out its official Web site for details on the first two storylines of the game 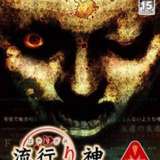